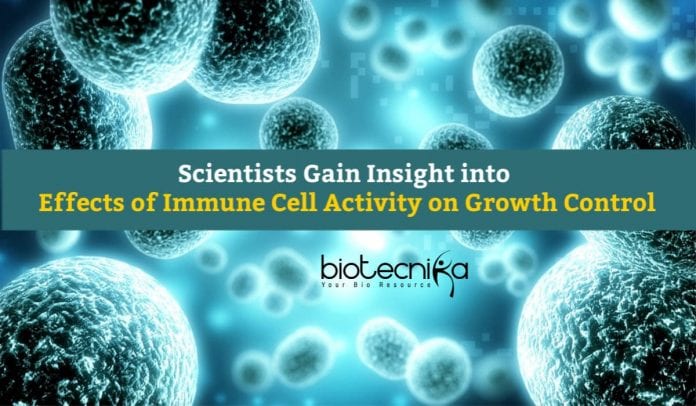 The complex process that continues to intrigue and challenge scientists is the regulation of growth in animals. Powerful biological systems have been developed in laboratories worldwide in order to de-construct the many elements that control growth.

Modulating cellular and molecular components at different stages of development and tracking the impact of these, from the earliest stages of formation to an adult, must be possible in the systems of choice. In this context, the fruit fly Drosophila melanogaster has been an invaluable resource, which has provided many key insights into the controlling element of organismal growth and organ size.

At the Department of Biotechnology’s Institute for Stem Cell Science & Regenerative Medicine (DBT-inStem), Bengaluru, Tina Mukherjee, and her group at the Metabolism and Development (MAD) Laboratory explored whether the growth of a whole organism is influenced by changes in immune status or function. To meet the requirements of an immune response to combat infection, the immune activity has a high energy demand and can force a systemic redirect of energy utilization from less essential needs.

Drosophila with a toolbox of genetic tricks that allow manipulations of immune status early in development (in larval life) and follow the consequences of these on growth in adult flies is made use of at the Metabolism and Development Laboratory at DBT-inStem. Drosophila’s blood cells function like myeloid cells in mammals and are important for stress responses, tissue integrity, tissue integrity, wound healing, and innate immunity. Similar processes and molecular strategies as exhibited in blood development in humans are employed in their development.

See Also
Stability Of Coronavirus On Skin, Dollar And Clothes Revealed By US Army Research

Intriguingly, Drosophila larvae deprived of blood cells display signs of insulin insensitivity and grow into small-sized adults. Evidence of growth retardation was seen in the animals with reduced blood cells, established in an assay where following exposure to a diet with excessive sugars. The group also examined if there was an opposite effect if the number and activity of cells in the immune system of Drosophila are increased.

It was observed that the growth outcomes were influenced, but with some key differences, when the number and activity of hemocytes – the blood cell type that was of interest were increased. The pattern of growth was not changed in any way with increased immune activity early in development, but throughout the larval development of the animals with this experience could withstand the detrimental effects of excessive sugar dietary stress as adults.

Overall, an intriguing insight into the nuanced effects of immune cell activity on growth control is provided in the study, published in Frontiers in Immunology. While showing that immune cells balance inflammation and insulin signaling was the main focus, new avenues of investigation on how immune function during development can impact the long-term growth of an animal are opened up by this work. Exciting directions arising from this work are knowing if the immune function growth control axis also functions in humans and other mammals.