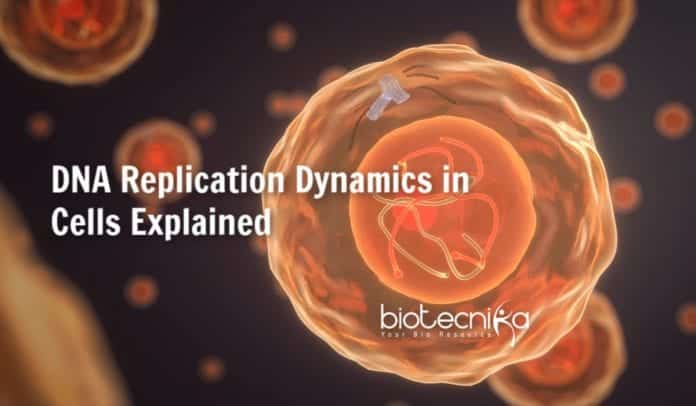 DNA replication is a process that must be coordinated very precisely to ensure that the genome is duplicated only once during a cell cycle, and this is crucial to the cell. A team of researchers at the University of Technology Sydney used super-resolution technology to visualize the DNA replication process directly in single human cells.

This is the first time scientists are quantitatively characterizing individual replication foci’s morphology, in situ epigenetic signatures, and Spatio-temporal organization in single human cells at the nanoscale.

The study published in PNAS provides new insights into how replication origin sites are chosen from thousands of possible sites.

Dr. Peter Su, a biophysicist from the UTS Institute of Biomedical Materials and Devices (IBMD), and lead author of the study, said DNA replication is initiated at numerous sites along the chromosomes.

Across the DNA, replication origins are clustered into thousands of replication domains (RDs), which then cluster as individual replication foci within the cell nucleus, he added.

It is poorly understood how such replication origins are chosen within individual RDs and if they are activated preferentially near specific chromatin features or activated randomly. DNA is packaged efficiently in the form of chromatins so that they can fit inside a cell and be protected from damage.

A distinct pattern of replication propagation dynamics that reverses directionality across S-phase of the cell cycle was revealed by scientists from the National University of Singapore and Peking University who collaborated in the study and suggested that it is diminished upon knockdown of a key regulator of 3-D genome architecture called CTCF.

Researchers used simulation and bioinformatic analyses for this study that suggests replication is preferentially activated on CTCF-organized looped chromatin structures. The study also demonstrates that replication activation at the sub-RD level is selected non-randomly.

The role of the local epigenetic environment in coordinating DNA replication across the genome is explained by the study. And it helps in understanding how the dynamics and organization of diverse intranuclear processes in time and space are controlled by multi-scale chromatin architecture.