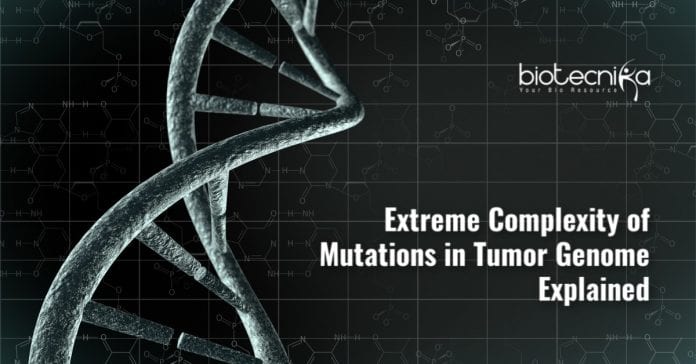 Cancer is the second leading cause of death globally was responsible for nearly 9.6 million deaths in 2018. Chemicals like those found in tobacco smoke, UV radiation, and various other carcinogens damage the genetic material of cells and lead to cancer.

Now, the impact of the DNA-damaging chemical diethylnitrosamine has been tracked to understand how chemicals cause mutations in our cells’ DNA, by a team of scientists from the German Cancer Research Center and the Universities of Cambridge and Edinburgh.

Hundreds of liver tumors in mice that were administered with diethylnitrosamine were analyzed by researchers. They observed 60,000 point mutations in the genome of each cancer cell, caused by this chemical mutagen. The evolution of tumors following the chemical change was then studied by the team.

While analyzing the mutation signatures, scientists discovered that over several cell generations, the lesions caused by the chemical remains largely unrepaired. Two different mutation profiles are developed by the two resulting daughter cells. The lesions repeatedly generated new combinations of mutations during further rounds of replication, providing multiple chances to find the best combination for tumor growth. This can drive unexpectedly complex patterns of mutations in the tumor

genome, which is referred to as “lesion segregation.”

Duncan Odom, PhD, research group leader at the German Cancer Research Center, said the scientists can now understand better how the surprising complexity of genomic mutations in cancer cells can arise, using the concept of lesion segregation. It can help to explain how cancer cells develop resistance to drugs or adapt to foreign tissue environments and how they can react so so flexibly to survival challenges.

Referring to the “chromosome-scale, strand-asymmetric distribution of mutations,” Sarah Aitken, PhD, NIHR clinical lecturer at Cancer Research UK Cambridge Institute and lead author on the paper tweeted that they found something really unexpected.

The scientists found ~60,000 mutations in a single tumor and similar Watson-versus-Crick-strand asymmetry of mutations in all 371 tumor genomes.

The cycle of DNA damage and lesion segregation repeats over time, as they are exposed to several mutagenic events. This ultimately results in the extreme genomic complexity of mutations in cancer. Important genes known as cancer drivers are affected by the mutations.

According to their findings, cancer cells with the most favorable pattern of mutations will grow after, survive therapies better, escape the immune system, and prevail.