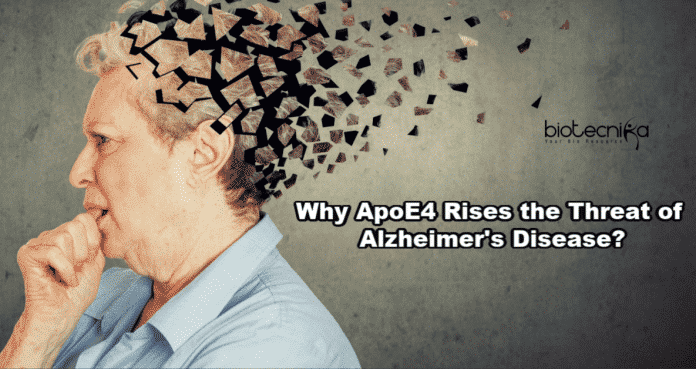 Why ApoE4 Rises the Threat of Alzheimer’s Disease?

The proteins that transport lipids by binding to them are called Apolipoproteins (Apos). Additionally, they can serve as cell-surface receptor ligands and enzyme co-factors. A variety of disorders would certainly appear without the proper function of apolipoproteins in the body. For instance, your risk for the late-onset type of Alzheimer’s disease can be influenced by Apolipoprotein

E (ApoE). Humans have 3 ApoE gene variants: ApoE2, ApoE3, and ApoE4. Several scientists have wondered why ApoE4 increases the risk of Alzheimer’s disease. There have been numerous studies attempting to describe the underlying mechanism for this increased danger, the way in which ApoE4 influences Alzheimer’s disease onset and development has yet to be confirmed.

Currently, a group of scientists from the Max Delbrück Center for Molecular Medication in the Helmholtz Association might have found an explanation.

In their research article titled “Apolipoprotein E4 disrupts the neuroprotective activity of sortilin in neuronal lipid metabolism endocannabinoid signaling”, they have discussed why ApoE4 Rises the Threat of Alzheimer’s Disease?

The outcomes of the study are released in the journal Alzheimer’s & Dementia. The study was led by Antonino Asaro, Ph.D., a postdoctoral researcher at MDC (Max Delbrück Center

The researchers said, “ApoE is a carrier for brain lipids as well as the most essential genetic threat factor for Alzheimer’s disease. The receptor sortilin binds with ApoE, which mediates uptake of apoE‐bound cargo into the nerve cells. The thing that remains unresolved is the significance of this uptake route for brain lipid homeostasis as well as Alzheimer’s disease threat seen with apoE4, however not apoE3”.

Using mass spectrometry the scientists researched the lipid structure of the mice’s brains. The scientists found that in the brain of mice with ApoE3 with sufficient quantities of endocannabinoid and unsaturated fatty acids, the lipid composition was healthy. The E4 mice did not get sufficient lipids compared to the brain cells of E3. The scientists found that the membrane layer vesicles that typically bring sortilin from the cell interior back to the cell surface area had gotten stuck inside the neuron in the ApoE4 mice.

Sortilin binds the lipid-loaded ApoE3, sortilin returns to the cell surface to bind new ApoE after depositing the cargo inside the neurons. To supply neurons with sufficient quantities of essential fatty acids – This procedure repeats itself. However, whenever ApoE4 is included, it comes to a halt.

The receptor clumps up inside the cell, if sortilin binds ApoE4 and transports it right into the nerve cell’s inside, which makes it unable to return to the cell surface. Less and lesser fatty acids are used up, and the cells become inflamed and prone. Consequently, as the aging procedure sets in they are susceptible to cell death, increasing the danger of developing Alzheimer’s disease.