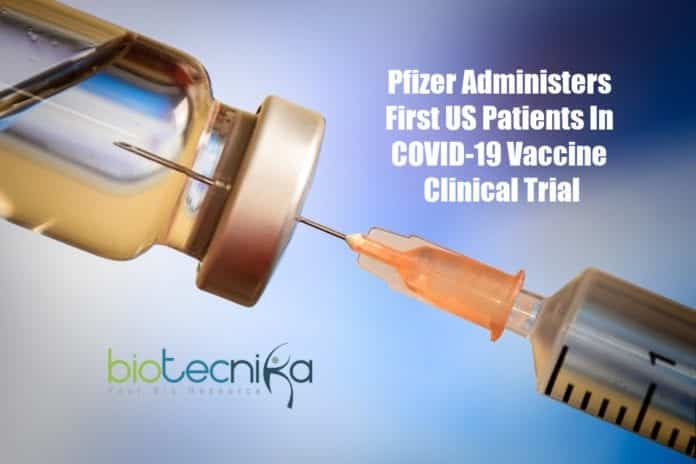 Numerous US companies are racing to develop a COVID-19 vaccine, which has affected more than 3.5 million and resulted in 257,207 individuals across the globe.

The pharma giant – Pfizer Inc has administered its experimental vaccine in the first set of US patients and antibody therapy could be readily available by this fall, as per Regeneron.

The pharma company, Gilead Sciences Inc is working on remdesivir to broaden the manufacturing of its virus treatment for global usage.

Regeneron said a speculative antibody therapy for COVID-19 could be offered as soon as this autumn, an accelerated timeline for a medication that’s scheduled to be researched in June on humans for the very first time.

During a conference call with investors on Tuesday, George Yancopoulos, Regeneron’s chief scientific officer said that to meet the timeline will certainly “depend upon a lot of elements,” including whether the treatment works as hoped, “and there is certainly a lot of risks”.

Yancopoulos stated We’ve kind of done it prior to and now we are attempting to take it to the next level”.

The drugmaker said Pfizer’s trials partnered with Germany’s BioNTech SE, are being conducted

Albert Bourla, CEO, Pfizer said: “It is remarkable that, in a short, less than four-month time-frame we’ve been able to move from preclinical researches to human testing”.

Scientists stated that they have started giving the first of four vaccine shots to the volunteers, which messenger RNA – a gene-based technology from BioNTech and Pfizer. On Monday, the first individual was vaccinated.

The messenger RNA, after being infused into the body, moves into human cells and signals them to produce the viral proteins that can cause the body to develop antibodies to prevent the infection. This technology of messenger RNA has not yet been accepted for usage.

This method has an advantage as it can quickly move into trials as it doesn’t include brewing sets of protein or inactivated viral fragments in living cells, which can longer period.

The vaccine trial has started with healthy and young people between the ages of 18-55 years. However, it will expand to an older group of volunteers aged up to 85 as safety is developed in that populace.

This vaccine trial will assist scientists to evaluate whether the vaccine candidates are risk-free, which produces the strongest immune response that can fight off the coronavirus and what should be the dosages.

The research study is being carried out on 360 people and the results are expected to come as early as next months.

Kathrin Jansen, Head of vaccination research and development, Pfizer said “However, the vaccine will certainly still require to undergo additional trials in more individuals. We will choose the most promising vaccine candidate by tracking the study’s progression.

Albert Bourla told The Wall Street Journal that if whatever goes well, a COVID-19 vaccine could be ready for emergency use as early as the falls.

Additionally, Pfizer and BioNTech are in a race with Johnson & Johnson, Moderna, and many other biopharmaceutical firms and academic institutions to come up with a safe and effective vaccine within a year to 18 months.

Currently, a handful of vaccines are in human trials, including Moderna’s, CanSino Biologics Inc, Inovio Pharmaceuticals Inc, and the Beijing Institute of Biotechnology.

A similar RNA approach is being pursued by Moderna and in March they have begun testing its vaccine on people.