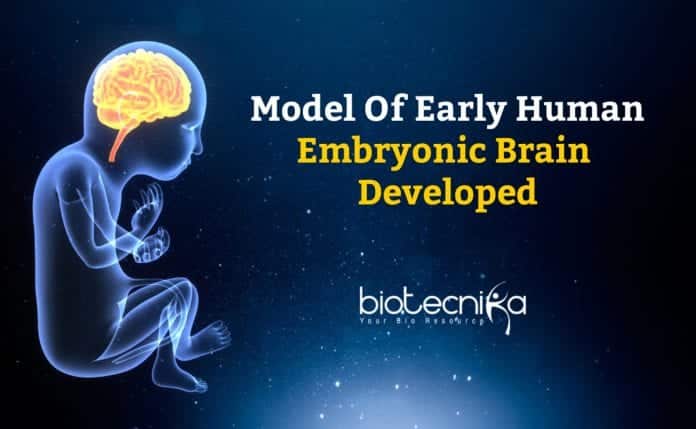 Model of Early Embryonic Brain
Developed by the University of Copenhagen

A model of an early embryonic brain has been designed by the University of Copenhagen’s stem cell researchers. For brain disorders such as dementia, epilepsy, and Parkinson’s disease, the development of stem cell treatments can be accelerated as the understanding of how the human brain develops can be increased through this model.

A lot about the human brain is known, but information on how it is formed is not known in detail. Particularly, so far, brain researchers were unaware of the stages from the second to the seventh week of embryonic development.

To learn more about this particular period, a model that mimics these early stages of the human brain in the laboratory has been developed by the researchers from the at the Nordisk Foundation Center for Stem Cell Biology at the Faculty of Health and Medical Sciences and from the Department of Neuroscience.

The model is based on the model developed in collaboration with bioengineers from Lund University in Sweden, the model of embryonic stem cells grown in a microfluidic system.

Assistant Professor Pedro Rifes, the first author of the study explains that “The formation of different brain regions during the early embryonic stage is induced by various concentrations of growth factors. This environment found in the early embryo can be recreated under extremely controlled conditions by using microfluidic methods. A stage that we have so far not been able to study is when the embryonic brain is at a very early stage, about four to five weeks after fertilization of the egg. We can create a tissue that resembles this stage when we expose stem cells to the controlled environment.”

The Developmental Tree of the Human Brain

A “Developmental tree’ of the brain,  a map of the development of the brain cells will be developed by the researchers using the new model.

Associate Professor Agnete Kirkeby, the principal scientist behind the study said, “We have access to a tissue that resembles the early embryonic brain for the first time now. Through this, we can analyze what happens to each individual cell at each stage of development.”

For producing different types of nerve cells for stem cell therapy, this “developmental tree” of the brain will act as a guide for the brain researchers around the world.

For several years, Agnete Kirkeby along with colleagues from Lund and Cambridge have been working to develop stem cell therapy for Parkinson’s disease. Dopaminergic nerve cells, a very specific type of nerve cells, are the cells that are lost in Parkinson’s disease and their project requires them to produce these cells. They soon will be able to test the stem cell treatment in humans, however, they have spent more than 10 years to get this far. Now, the researchers expect to be able to considerably shorten this process in the future as they can gain more unknown knowledge from the new model.

Agnete Kirkeby says, “When producing human nerve cells in the lab, we will become better at guiding the stem cells in the right direction if we understand exactly how the brain develops in the early stages. For brain disorders such as certain types of dementia, epilepsy, and Parkinson’s disease, we can efficiently develop treatments for these neurological diseases through this model.”

There might other useful purposes also fulfilled by the embryonic brain model, believes Agnete Kirkeby.

The reaction of the brain cells in the embryonic stage to certain chemicals surrounding us in our daily lives, such as substances in the medications that some pregnant women may require, in consumer products or in our environment can be investigated using this model. To test these reactions, we have not had a good model so far, thus this model can be useful.”