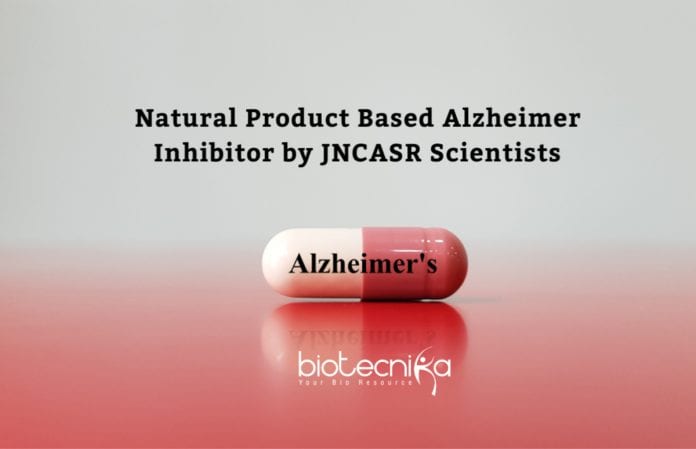 At an autonomous institute under the Department of Science & Technology (DST), Govt. of India, the Jawaharlal Nehru Centre For Advanced Scientific Research (JNCASR), scientists have modified the structure of a natural and cheap product similar to curcumin, Berberine,  available commercially, as an Alzheimer’s inhibitor by turning it into Ber-D. The journal iSceince published their research work.

Alzheimer’s disease accounts for more than 70% of all dementia and it is the most prevalent neurodegenerative disorder. Developing effective medication has been difficult for the researchers as the disease has multifactorial nature attributed to multifaceted toxicity.

JNCASR Prof. T. Govindaraju led his team in the search for a natural product based therapeutic candidates for the disease, and selected isoquinoline natural product berberine found in India and China. But, berberine is toxic to cells and is poorly soluble. Thus, they modified berberine into a soluble (aqueous), antioxidant, Ber-D. To the multifaceted amyloid toxicity of Alzheimer’s disease, the researchers found this to be a multifunctional inhibitor.

). To ameliorate in cellulo multifaceted toxicity, the research team from JNCASR developed this multifunctional inhibitor.

The structural attributes of Ber-D include rescuing biomacromolecules from oxidative damage and preventing the generation of reactive oxygen species (ROS). The aggregations of the peptides of amino acids crucially involved in Alzheimer’s disease, the metal-dependent, and -independent Amyloid beta (Aβ) (which are the main component of the amyloid plaques found in the brains of people with Alzheimer’s disease) are inhibited by Ber-D.

To target Alzheimer’s disease’s multifaceted Aβ toxicity effectively, the team developed Ber-D. Berberine is water-insoluble as it has 4 Phenolic hydroxyl groups which are methylated. To obtain water-soluble polyphenolic derivative Ber-D, the natural product berberine was subjected to demethylation. Demethylation agent BBr3(Boron tribromide) was treated with berberine and Ber-D was obtained.

The antioxidant Ber-D prevents protein oxidation, DNA damage, and lipid peroxidation, which cause numerous adverse biochemical cascade reactions leading to neuronal death and it efficiently quenched both reactive oxygen species (ROS) and reactive nitrogen species(RNS). Ber-D prevents one of the major causes of neuronal death by protecting mitochondria from dysfunction, and it inhibits the formation of toxic Aβ fibrillar aggregates. This multifunctional antioxidant and aggregation modulator, Ber-D effectively ameliorates multiple Aβtoxicity both in vitro and in cellulo conditions and shows their design strategy of synthetically transforming berberine to Ber-D useful.

To treat multifaceted toxicity of Alzheimer’s disease, Ber-D is considered as a promising candidate with its multifunctional attributes for developing effective therapeutics.