Home Biotech News Why Is The World More Affected By COVID-19 Than By Swine Flu?
Facebook
Twitter
WhatsApp
Linkedin
Email 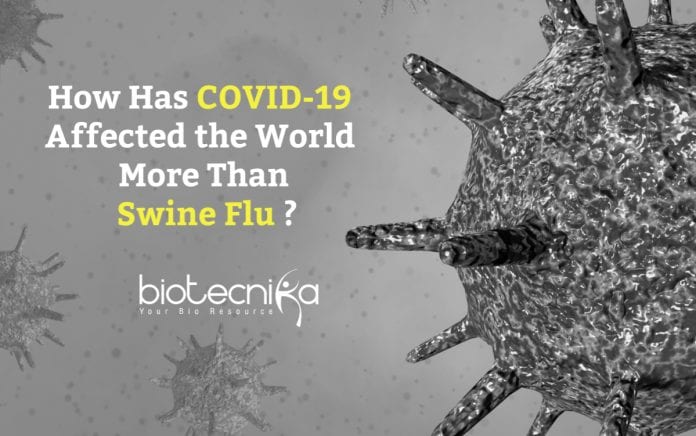 Why Covid19 is Severe than Swine Flu

There is no sign of the Covid-19 pandemic abating yet with over 20 lakh infected and 1.37 lakh deaths globally as of April 16 afternoon.

During a media briefing on April 13, Tedros Adhanom Ghebreyesus, the director-general of the World Health Organization (WHO) said, “We know that Covid-19 is 10 times deadlier than the 2009 flu pandemic and that it spreads fast.”

To control the outbreak that has caused havoc in all aspects of life in just four months, scientists all over the world are racing against time to develop a vaccine.

According to the medical journal The Lancet, around 1,51,700 and 5,75,400 deaths due to H1N1 influenza, the swine flu pandemic of 2009 was reported in the first year. However, the death toll was around 2 lakh according to more studies.

However, a much larger population was affected by the H1N1. During the first year of the pandemic, researchers estimated that about

24 percent of the population was infected with the virus, in an analysis of serologic studies from 19 countries.

With 61 million as the midlevel estimate, around 43 million to 89 million could have contracted the disease, according to the United States Centers for Disease Control and Prevention (CDC). As of April 16 afternoon, Covid-19 has affected more than 2 million.

The age group that is affected is another contrast between the two. Covid-19 has been affecting those who are above 60 years, while Swine flu had mostly hit the 26-50 age group.

The CDC had said, “Globally, in people younger than 65 years of age, 80 percent of (H1N1)pdm09 virus-related deaths were estimated. From typical seasonal influenza epidemics, this differs greatly. Around 70 to 90 percent of deaths were estimated to occur in people aged 65 and above in cases of typical seasonal influenza epidemics.”

“The people facing the highest risk from COVID-19 are older people,” stated a WHO statement.

The two pandemics also differ in the gender ratio of the infected. For Covid-19, the percentage of males infected is 65 percent, while it was 50.6 in swine flu.

The case fatality rate is what is almost similar. The CFR for Covid-19 is marginally higher than swine flu at 6.2 percent, while swine flu had a mortality rate of 6 percent.

The H1N1 influenza symptoms are almost similar to coronavirus – cough, fever and runny nose. Swine flu also spreads much like coronavirus, through coming in contact with a carrier or through droplets released in the air due to coughing or sneezing. However, the H1N1 has a flu shot’ to prevent its spread, unlike coronavirus, whose vaccine is being worked upon.

The minister of state for health and family welfare, Ashwini Kumar Choubey, replying to a Lok Sabha query on March 13 said that a total of 1,469 cases of the seasonal H1N1 had been recorded causing the death of 30 people from January 1, 2020, till March 1. However, the data from India Today Data Intelligence Unit (DIU) has found that India had recorded 1,39,956 cases of H1N1 influenza and 9,221 deaths from 2012 to 2020 (March 1).

Source
Why Covid19 is Severe than Swine Flu