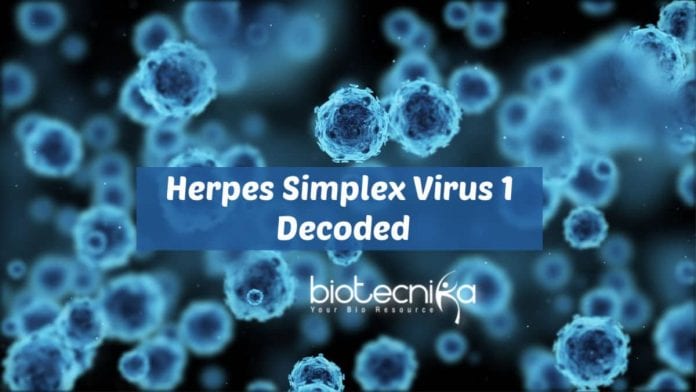 Scientists had assumed until now that in the genome of herpes simplex virus 1 (HSV-1), there are about 80 so-called open reading frames (ORFs). The information in the DNA is read and translated into proteins at these locations in the genome. Now, it has been found that there are a lot more, namely 284 open reading frames. They have also identified the hundreds of novel transcripts from which these are translated.

In the Nature Communications journal, this has been reported by the research groups from Julius-Maximilians-Universität (JMU) Würzburg in Bavaria, Germany, and other institutions.

The head of the  JMU Chair of Virology, Professor Lars Dölken said, “the individual genes of the virus can be studied more precisely than before through these new findings.”

For the study, a broad spectrum of the latest systems biology methods was used by the research team. Along with JMU, the other institutions involved were the Ludwig-Maximilians-Universität of Munich, the University of Cambridge in England, and the Max Delbrück Center for Molecular Medicine in Berlin.

The data also have concrete implications and are not just important for a better understanding of the virus. The development of HSV-1-based oncolytic viruses is an instance

of the implications. In immunological therapies of some tumor diseases, such as malignant melanoma, these are viruses that are used.

The virus causing unpleasant itching cold sores is how the herpes simplex viruses of type 1 (HSV-1) are known to many people. There can be serious consequences from infection with this virus type. For instance, for patients in intensive care units, HSV-1 can cause life-threatening pneumonia. It can cause encephalitis (which usually leads to permanent brain damage) in healthy people.

Herpesviruses permanently nestle in body cells, a  person will retain it for the rest of his or her life once infected with the virus. For a long time, they remain inconspicuous. They become active again only under special circumstances, such as a poor immune system.

Money from the European Research Council

Herpes viruses are very intensively researched by Dr. Lars Dölken. In 2016, the European Research Council awarded him a Consolidator Grant for his successes in this field. Around two million euros was endowed with the prize. For studies on herpes viruses, this money will be used.