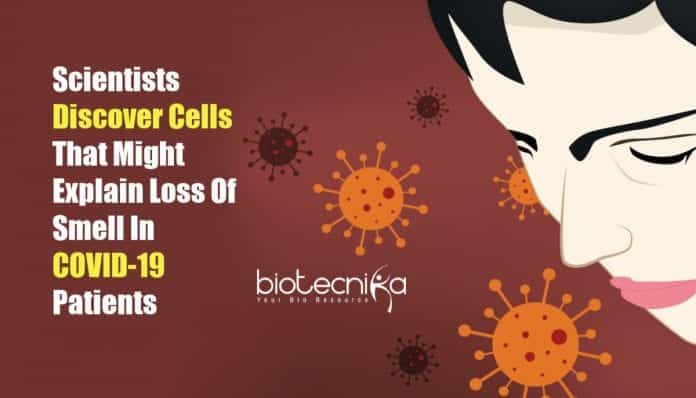 Can a loss of smell be an early caution for a COVID-19 infection? Numerous reports have appeared, mainly from Europe and the US, from medical professionals and ear, nose, and throat professionals, of patients with COVID-19 complaining of anosmia – loss of the ability to detect the smell. It is not yet clear whether neurons in the brain that are accountable for recognizing smell are damaged, or whether other cells might be involved due to the infection.

Researchers from Delhi’s Indraprastha Institute of Information Technology stated that it is not neurons, but a group of cells in the upper regions of the nasal cavity that might be involved in the smell sense, these cells are called sustentacular cells and horizontal basal cells. The report of the study is available as a public preprint but still is being peer-reviewed. Both cells are not directly associated with helping us smell. However, these cells nourish and support other cells that help to smell, and so the olfactory sensory cells might be getting inflicted indirectly by the infection.

On this facet, many types of research are arising, and studies claim the

loss of odor is different from the reduced smell or a lack of perceiving in food when one is afflicted with a stuffy nose or cold.

Researchers concluded this research by bioinformatics tools and estimating the presence of a vital enzyme in these olfactory cells, known as Angiotensin Transforming Enzyme (ACE 2). The researchers who worked on this project were Krishan Gupta, Sanjay Kumar Mohanty, Siddhant Kalra, Aayushi Mittal, Tripti Mishra, Jatin Ahuja, Debarka Sengupta, and Gaurav Ahuja. The COVID-19 coronavirus has spike proteins that bind to ACE 2 receptors on human cells, and the enzyme’s existence is a proxy to reveal the virus in the body’s cells.

Studies so far suggest that it takes 5-14 days for clinical signs of the COVID-19 infection to show up. The symptoms include dry cough, labored breathing, and fever. Unless this is manifested, those infected people will be most likely to continue socializing and spreading the infection.

As the work has not yet been released in a scientific journal, the writers did not comment on their work. “The findings pointed to a potential diagnostic,” said Samir Brahmachari, molecular biologist-familiar with the study, previous Director-General, CSIR.

Samir said to The Hindu, “Since the loss of scent appears much earlier, any person who is not sick yet shows a considerable failure to smell might self-isolate and help in avoiding infecting other people. A set of questions could be used using an app for people to check or report these systems to a medical professional.”

A team at King’s College London conducted an analysis that showed that 59% of COVID-19 positive people reported anosmia, compared with only 18% of those that tested negative. The study was promising in predicting positive COVID-19 patients than self-reported fever.

The report added, “Several medical professionals have highlighted the abrupt loss of smell in a lot of COVID-19 infected patients, especially from the U.S., France, China, Britain, Iran, South Korea, and Germany. Therefore, these data collectively emphasize its potential application as the first line of diagnostics in the patients having COVID-19 signs and symptoms.”