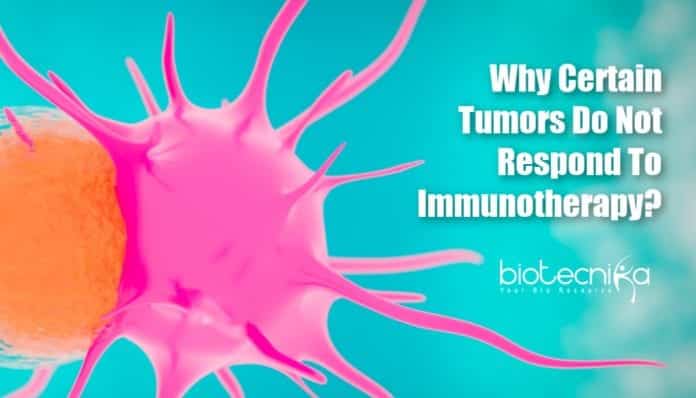 How Tumors Hide From Immunotherapy Uncovered By Scientists

Scientists discovered how certain tumor cells save themselves from PD-1 blockade therapy, one of the powerful immunotherapy treatments.

Immunotherapy is a fast emerging treatment method that turns the body’s own immune system against the cancer cells. PD-1 blockade therapy is one of the popular immunotherapies.

PD-1 or programmed cell death protein 1 is a protein found on all T cells that prevents them from attacking healthy cells. Cancer cells, too, escape the attack from T cells by producing a protein called PD-1 ligand that interacts with the PD-1 protein on T cells, switching them off.

Alok Kumar and a team of researchers at the Department of Immunology and Genomic Medicine, Kyoto University, Japan, discovered how certain cancer cells hide from T cells even after PD-1 blockade therapy.

T cells recognize disease cells by the MHC class I proteins on the surface of cancer cells holding up small fragments of molecules and they start preparing for an attack with the help of mitochondria. The team hypothesized that there could be two possible way how tumor cells hide from immunotherapy. Tumor cells might be either preventing T cells from recognizing them or producing some long-range molecules that stop T cells from preparing for an attack.

To explore these options further, Dr. Alok developed a new tumor model in mice. Each mouse had two types of tumors—one that responds to PD-1 blockade therapy and another that is unresponsive to the therapy.

Dr. Alok identified a group of tumors that released molecules to dampen all T cells, affecting both tumors simultaneously. “We found that some human cancer cells release immunosuppressive molecules that inhibit the activity of energy-producing mitochondria in T-cells,” Kumar explains.The identity of those molecules is still unknown, but he found the molecules are blocking the mitochondria of T cells.

Mitochondria, the power-house of the cell, helps T cells to activate and multiply during an attack. Blocking mitochondria prevented T cells from attacking tumor cells.

Kumar and his colleagues discovered that drugs that boost the activity of mitochondria in T cells could make PD-1 blockade therapy more effective.

Tasuku Honjo, senior author of the paper, Professor of Immunology and Genomic Medicine at Kyoto University and 2018 Nobel laureate in Physiology or Medicine said, “If we could identify these unknown factors and develop drugs that block them, we could save patients’ lives by using the drugs alongside PD-1 blockade therapy to prevent tumors from defending themselves.”

Scientists believe that they could expand their findings in the mouse model to human cancer patients. If they could find those unknown immunosuppressive molecules, it would be a life-saving discovery for many cancer patients who don’t normally respond to PD-1 blockade therapy.

Kyoto University, founded in 1897, is one of Asia’s premier research institutions responsible for producing numerous Nobel laureates and winners of other prestigious international prizes. A broad curriculum across the science and arts at both undergraduate and graduate levels is complemented by numerous facilities, offices as well as research centers around Japan and the world.