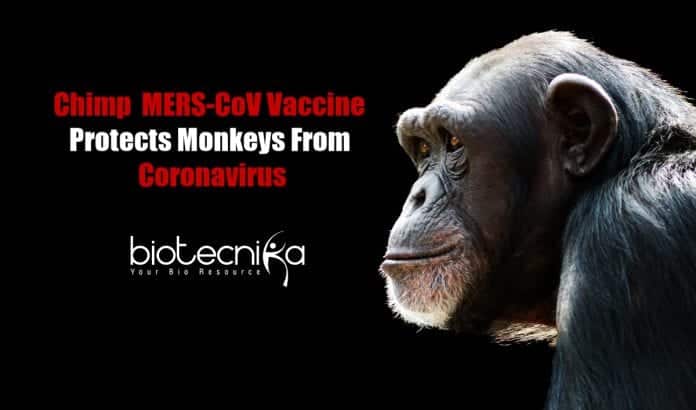 The development of a COVID-19 vaccine remains to be a challenge for the healthcare sector. Advancement in developing the vaccine is ongoing, while the virus is spreading around the world. The SARS-CoV-2 virus that causes COVID-19 comes under the same category of coronavirus as the MERS-CoV which once affected the population in 2012.

In the hope of discovering a vaccine against coronavirus, many researchers and scientists are conducting experiments. Scientists have found a vaccine called Chimp Adenovirus MERS-CoV vaccine (ChAdOx1 MERS), which was used in monkeys.

The research found that two groups of rhesus macaque monkeys were protected from MERS-CoV using the Chimpanzee vaccine. As per reports, this vaccine is still under study.
The research was performed at the Rocky Mountain Laboratories in Hamilton, Montan by the scientists of the National Institute of Allergy and Infectious Illness ( NIAID). The group of scientists from the University of Oxford Jenner Institute also collaborated in this study.

The ChAdOx1 vaccine was developed by a group of scientists at the University of Oxford, UK. The research results

were published by the National Institutes of Health ( NIH).

As per the NIH, the study on macaque was conducted in 3 groups of animals. One group of animals were vaccinated for 28 days before infecting with coronavirus. The other group of animals got two sets of vaccinations (both prime-boost approach).

The first group, the prime-only group, showed fewer infections in their lung tissue than the control group. Unlike the control animals, the vaccinated groups did not show any lung damages and also were protected from the MERS-CoV.

This Chimp Adenovirus MERS-CoV vaccine is still in its Phase 1 human clinical trials in Saudi Arabia and the United Kingdom.