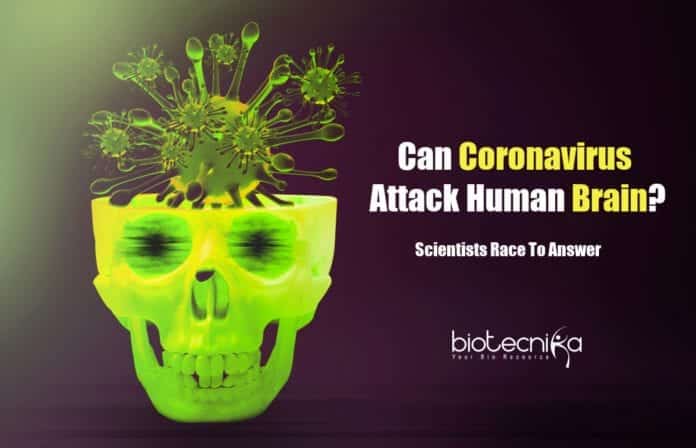 A poorly known virus and a human organ whose enigma are yet to decipher. None of us would want to mix both, particularly during this pandemic that is devastating health facilities and shattering economies across the globe. However, that could be taking place.

The coronavirus outbreak, which has bounced from obscurity to international notoriety in just a few months, has turned into one of the gravest health crises encountered by humankind. By its rapid spread and causing health issues in host mostly pertaining to the respiratory system in humans, the coronavirus has stunned scientists.

Nonetheless, there is an expanding body of evidence indicating that the Sars-CoV-2 might be impacting human brains also.

Sars-CoV-2 has been linked to neurological disorders on the basis of three case studies published in the last couple of weeks. An indication of possible neurological issues – loss of smell or taste is rapidly emerging as a sign of COVID-19. As well as, there have been records of people with COVID-19 showing brain-related symptoms such as headaches.

Recently, doctors from the U.S. reported a case of a woman airline worker in her late 50s who was complaining of symptoms

associated with the COVID-19 – fever, cough, and body ache and was hospitalized to a medical facility. Tests confirmed the woman is COVID-19 positive.

The diagnosis didn’t finish there. Few more symptoms like lethargy, disorientation, and confusion were observed in the patient which made the doctors conduct imaging tests. The reports showed some damages in the brain cells. Doctors detected a rare kind of brain inflammation usually seen in kids – Acute Necrotizing Encephalopathy (ANE). The patient was given the required treatment.

The doctors noted that this was the first case of the COVID-19 being linked to Acute Necrotizing Encephalopathy to their knowledge. They went on to suggest the professionals to watch out for the presence of ANE and altered psychological condition.

The same kind of situation was reported from China, where doctors discovered a 61-year-old woman who complained of having extreme fatigue and weakness in her legs. Initially, the patient did not show any kind of signs related to the COVID-19 infection.

The patient was hospitalized, where her condition got deteriorated. The patient started showing reduced capability to sense touch and loss of strength in her legs and arms, and when tests were done on her, she was diagnosed with Guillain-Barré syndrome.

The woman unexpectedly developed cough and fever after a few days later, which made her doctors test her for the COVID-19 infection. The test confirmed that she was COVID-19 positive, along with her neurological health problems. The patient was given treatment for both Guillain-Barré syndrome and COVID-19 and was discharged from the hospital after a month.

The research was published in The Lancet. The doctors hypothesized that the Guillain-Barré syndrome might have caused due to Sars-CoV-2 infection.

In an additional case from China, a 56-year-old man diagnosed with COVID-19 entered the emphasis of medical professionals after he fell short to respond to regular treatment. The patient was shifted to an ICU for a more thorough treatment. The man started showing signs linked to lowered consciousness in the ICU.

The doctors carried out brain imaging tests, which showed no problems. His cerebrospinal fluid was examined and it helped the doctors to identify some inflammation in his brain.

The interesting part was that the patient’s cerebrospinal fluid had the presence of coronavirus fragments. The patient was given treatment for brain inflammation as well as COVID-19. He was discharged from the hospital after a month.

Currently, the new sign for COVID-19 is considered to be the loss of smell or taste, which might have neurological causes. There is also unscientific proof of novel coronavirus patients displaying neurological symptoms such as dizziness or headaches.

The theory that the coronavirus is infecting the brain is not completely a new thing. Studies have shown that most of the human coronavirus family is able to infect and the central nervous system, including the brain and spine.

Canadian scientists carried out an examination in 2000, examining the bodies of patients who had suffered neurological disorders. The research showed the presence of 2 common human coronaviruses in the brains of the dead individuals.

Sars-CoV-2 (COVID-19) shares genetic resemblances to Sars-CoV – the coronavirus that caused an international epidemic in the early 2000s. At that time, doctors reported cases of Sars patients with brain-related symptoms, and researchers had reported discovering evidence of the coronavirus infecting the human nervous system.

In 2005, after a couple of years after the epidemic ended, the Chinese scientists isolated a strain of Sars-CoV from the brain of a SARS patient. The scientists claimed that their findings gave evidence that the SARS virus can infect the human brain.

In 2008, researchers from the U.S revealed that when the SARS virus is introduced in genetically modified mice, the virus managed to enter the rats’ nervous system by infecting the nerve endings present in their nose and reach the brain.

These research studies and other comparable studies have actually formed the bedrock of a growing belief that the new coronavirus may be infecting the human brains, as it is related to the SARS virus and is even more potent.

SARS-COV-2 AND THE BRAIN

Earlier this year, a research article by Chinese scientists noted that Sars-CoV had been shown to infect human brains and elevated the concept that some of the existing COVID-19 deaths may have caused due to neurological infections. The scientist said that similarities between the SARS virus and COVID-19 coronavirus made it worth exploring whether Sars-CoV-2’s potential to infect the nervous system was partially due to the acute respiratory failure of patients with COVID-19.

An additional article by a team of Chinese and Japanese researchers took off from previous research to figure out how Sars-CoV-2 could be infecting human brains. Another concept put forth by the researchers is similar to what was seen in mice in the 2008 Sars research study: The virus could be entering into the spinal cord by infecting nerve endings in the body and after that reaching the brain.

The other concept is that the novel coronavirus adheres itself to a specific ‘receptor’ present in the protective liquid that surrounds the spine. Once it gets attached to the receptor, the virus permeates into and infects the central nervous system.

In medical research, the human brain is called the last frontier. We’re yet to comprehend the fundamentals of this incredibly complicated organ. Therefore, if the brain is ending up being the target of a fatal virus against which humanity is presently defenseless, it would have incapacitating repercussions.

Today, there is no clear-cut evidence to claim that the novel coronavirus is infecting human brains, almost every research article related to this topic, including the ones mentioned above, calls for more study on this topic.

Since the other related coronavirus could infect the human central nervous system in humans in the past and presently even some COVID-19 patients have shown neurological symptoms making it a topic that we need to research entirely as soon as possible.