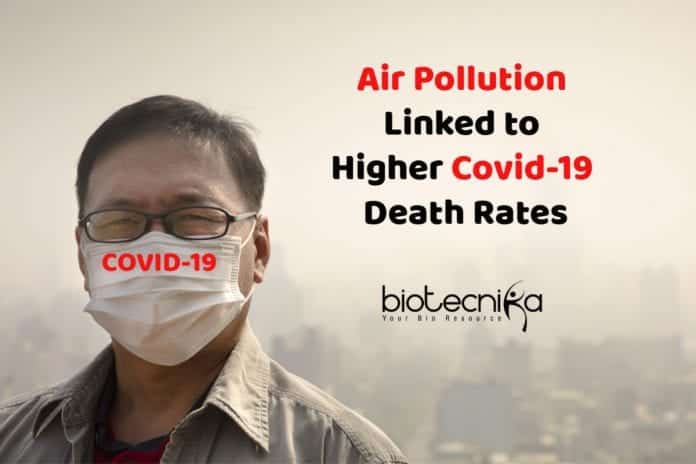 According to the analysis, air pollution is linked to significantly higher death rates in people with Covid-19. The risk of respiratory problems that can be fatal for coronavirus patients is increased by polluted air.

The scientists in the study have shown that in the years before the pandemic, even a tiny, single-unit increase in particle pollution levels is associated with a 15% increase in the death rate of coronavirus patients. The research was done in the US, and it is calculated that hundreds of lives could have been saved if there was slightly cleaner air in Manhattan.

The research suggests that people living in cleaner areas are less likely to die from coronavirus, and the people in polluted areas are far more likely to die from the Covid-19 infection, given the large differences in toxic air levels across countries. The risk of acute respiratory distress syndrome, which is extremely deadly and a cause of Covid-19-related deaths, as well as other respiratory and heart problems, was already known to increase with polluted or dirty air.

of the country and that is where high death rates were recorded.

To slow the spread of the virus and deploy extra resources to deal with the outbreak, the scientists said their findings could be used to ensure that areas with high levels of air pollution take extra precautions. Due to the widespread lockdown, air pollution has already fallen. However, Covid-19 deaths could be reduced in the future by ensuring cleaner air.

In about 3,000 US counties, covering 98% of the population, the air pollution and Covid-19 deaths up to 4 April were analyzed by the researchers at the Harvard TH Chan School of Public Health in Boston for this study. The team stated, “There was a 15% increase in the Covid-19 death rate due to an increase of only 1μg/m3 in PM2.5 [particles] in air.”
Over 15-20 years, the risk of death from all causes was already known to increase with a small increase in exposure to particle pollution, but this increase was seen to be 20 times higher for Covid-19 deaths in the new study.

They said, “The results are statistically robust and significant. A range of factors, including the number of Covid-19 tests and hospital beds available, obesity, smoking, and poverty levels, were considered in this study.”

One scientist from the Harvard team, Rachel Nethery, said, “The air pollution exposure is seen to dramatically increase the risk of death from Sars during the 2003 outbreak in our previous work. Hence, we think that those findings and our results here seem to be consistent.”

A fellow tea member, Xiao Wu, said, “To reduce the risk of poor outcomes from the Covid-19 outbreak, this information can aid us in preparing populations with high pollution exposure to take extra precautions and allocate extra resources.  Despite our hope of a vaccine or treatment for coronavirus, Covid-19 is likely to be a part of our lives for quite a long time. Considering this, to reduce the Covid-19 death toll, we should contemplate additional measures to protect ourselves from pollution exposure.”

The need to keep enforcing existing air pollution regulations and that the failure to do so could potentially increase the Covid-19 death toll is highlighted in the study’s results, said the authors. They noted that on 26 March, the US Environmental Protection Agency suspended its enforcement of environmental laws.

For the study’s publication in a major medical journal, it is being fast-tracked.

At the Queen Mary University of London, Prof Jonathan Griggs said that the study had some limitations, a few important factors were not being measured at individual levels, factors such as smoking. Yet, the study is methodologically plausible and sound, he added.

He said, “Once the lockdown is eased, the locally generated particle pollution will bounce back and this, we need more studies urgently.”

After Italy and Spain, the third-highest death toll to date is in the US. In the journal Environmental Pollution, a second study focusing on Italy was published, and it said, “An additional co-factor of the high level of lethality recorded in northern Italy is due to the high level of pollution in northern Italy, we conclude that air pollution must be considered as a risk-increasing factor.”

It noted that compared to the rest of Italy, up to 21 March, the death rate reported in the northern Lombardy and Emilia-Romagna regions was about 12%, while the other parts had 4.5%.

It said, “The first line of defense of upper airways, namely cilia, is well known to be impaired by pollution. Thus people who are more prone to develop chronic respiratory conditions and are more vulnerable to any infective agent are the ones living in an area with high levels of pollutants.”

In mid-March, the medical scientists had warned that Covid-19 could be worsened by air pollution.

In a comprehensive global review published in 2019, it was found that every organ and virtually every cell in the human body could be damaged due to long periods of air pollution.