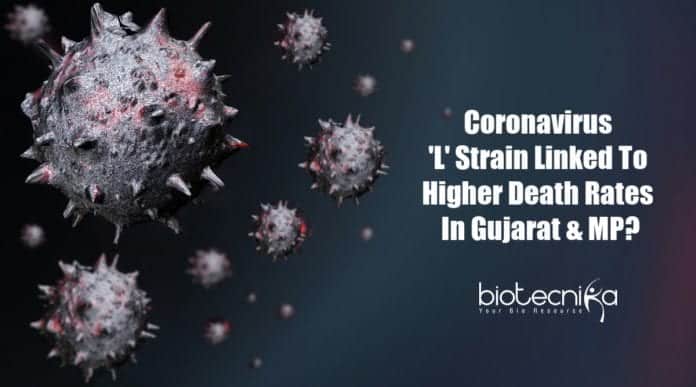 A more virulent strain of coronavirus may be wreaking havoc in Indore, the hotspot in Madhya Pradesh, claimed doctors. The samples of 57 people who were killed by the COVID-19 will be sent to the National Institute of Virology (NIV), Pune to confirm their doubts of the strain being deadlier than those in other parts of the country.

Jyoti Bindal, Dean of Government Mahatma Gandhi Memorial (MGM) Medical College said they have a feeling that the strain is more virulent in the Indore belt. Patients turning up late at the hospital is also a factor for the high fatality rate in Indore.

The high fatality rate in Indore needs to be investigated through viral culture and RNA extraction, said Jitendra Bhargava, director of the state government-run School of Excellence in Pulmonary Medicine.

has been found by a study from China, who named the strains ‘L’ and ‘S’.

‘On the origin and continuing evolution of SARS-CoV-2’, a study published in National Science Review points out the presence of more aggressive L type coronavirus in the early stages of Wuhan Outbreak. But human intervention decreased its frequency.

The novel coronavirus has evolved into two major types; L and S, according to the population genetic analysis of 103 SARS-CoV-2 genomes. The novel coronavirus strains are defined by two different SNPs that show nearly complete linkage across the viral strains sequenced so far. Although the S type (~30%) was found to be the ancestral version, the L type (~70%) is more prevalent than the S type.

Experts are now hypothesizing that the reason behind high mortality rates in Gujarat, which reported 133 deaths so far could be the dominance of more aggressive L strain.

The genome sequencing of novel coronavirus at the state-run Gujarat Biotechnology Research Centre (GBRC) had recently revealed that it contains L type strain. C.G. Joshi, director of GBRC, said the analysis done by scientists abroad has shown the dominance of L strain in places where high mortality was reported.

The sample collected for the genome sequence analysis of coronavirus contained the L strain, he added. And it is much more virulent than the S type. The number and percentage of mutations determine variation in coronavirus. The L strain has caused more deaths, according to the findings of scientists.

The GBRC had recently decoded the complete genome sequence of the SARS-CoV-2 and identified three new mutations.

The mortality rate is low in Kerala as most of the patients came from Dubai, where the milder S train is dominant, said Atul Patel, an infectious disease specialist at the Sterling hospital. The L strain was more common in Italy and France while Kerala has more cases of S strain. New York has a higher mortality rate compared to other states in the US as most of the patients in New York were travelers from Europe.

Which strain is predominant in India has not been established yet. Also, the hypothesis of a marked increase in death rates caused by different strains of coronavirus has not been backed by any studies so far. According to the Gujarat state government, the high mortality rate in the state is attributed to high-risk factors and co-morbidities.

The COVID-19 patients who passed away in Gujarat were found to have diabetes, hypertension, heart and lung diseases, and other common diseases. Age group over 60 years, pregnant women, and those under 5 years are included in the high-risk factors and according to Jayanti Ravi, Principal Secretary of Health, they account for 90% of COVID-19 deaths.