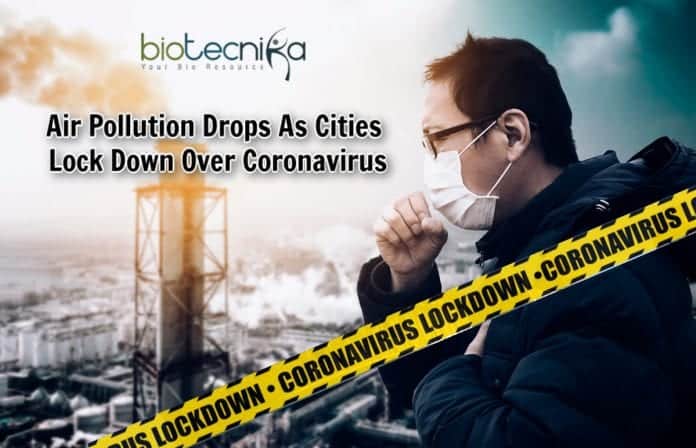 Following the coronavirus outbreak, a fall in global nitrogen levels has been marked in the satellite imagery from the European Space Agency.

Air pollution levels around the world are slashing as the coronavirus pandemic is shutting down industrial activity.

The ESA’s Sentinel-5P satellite readings showed that levels of nitrogen dioxide (NO2) over industrial clusters and cities in Europe and Asia were significantly lower than in the same period last year.

Nitrogen dioxide is released from powerplants, industrial processes, and car engines and it worsens respiratory diseases like asthma.

Although the gas is not a greenhouse gas, the major sources of the gas are the same as that of the world’s carbon emissions that lead to global warming.

Paul Monks, professor of air pollution at the University of Leicester and former chair of the UK government’s science advisory committee consider this as the largest scale experiment the world has ever seen. According to him, we might be currently looking at the future with a low carbon economy.  And this could give is some hope.

Some health benefits could be achieved through the drop in air pollution, but the loss of life from the coronavirus disease could

According to the World Health Organization, NO2 concentration above 200 micrograms per cubic meter can cause inflammation of airways, therefore it is considered as a toxic gas. Pollution particles can also act as carriers of pathogens and can worsen many health conditions. Whether airborne pollution particles can act as a carrier of SARS-CoV-2 virus is under investigation by WHO.

The largest fall in air pollution was observed in the city of Wuhan in China, following the lockdown of the city in late January due to the Covid-19 outbreak. The city is home to 11 million people and hundreds of factories supplying hardware and car parts globally and serves as the major transportation hub. The NO2 levels across central and eastern China dropped by 10-30%, according to NASA.

South Korea had been struggling with high emissions from coal-fired power plants as well as from the industrial facilities in the neighboring parts of China. However, the nitrogen dioxide level dropped there too during the coronavirus pandemic. Though the country has not completely locked down the entire region, they are carefully tracing and isolating suspected Covid-19 cases.

Northern Italy was one of western Europe’s pollution hotspots, as the smoke from a number of factories used to get trapped against the Alps at the end of the Po Valley. But the changes in the NO2 levels in the region following the outbreak was remarkable.

The NO2 levels in Milan and other Northern parts of Italy have dropped by 40% since 9th March, when the country went into lockdown. Vincent-Henri Peuch, director of the Copernicus Atmosphere Service said the change is quite unprecedented. “In the past, we have seen big variations for a day or so because of the weather. But no signal on emissions that has lasted so long,” he said.

The reduction in road traffic, as well as the industrial activities, could be the reason behind such a drastic drop in pollution level following the coronavirus outbreak. A similar pattern has started to appear in other European countries entering into lockdown. The data has to be studied further to confirm this.

Roadside monitors at the pollution hotspots like Marylebone in London have started to show significantly reduced levels of pollution even though the UK is one week behind Italy in terms of the spread of the disease and government’s response.

According to Monk, road traffic accounts for 80% of nitrogen oxide emissions in the UK. An average diesel car contributes 52 milligrams of pollutants to air with each kilometer driven.

“What I think will come out of this is a realization – because we are forced to – that there is considerable potential to change working practices and lifestyles, said Monk.