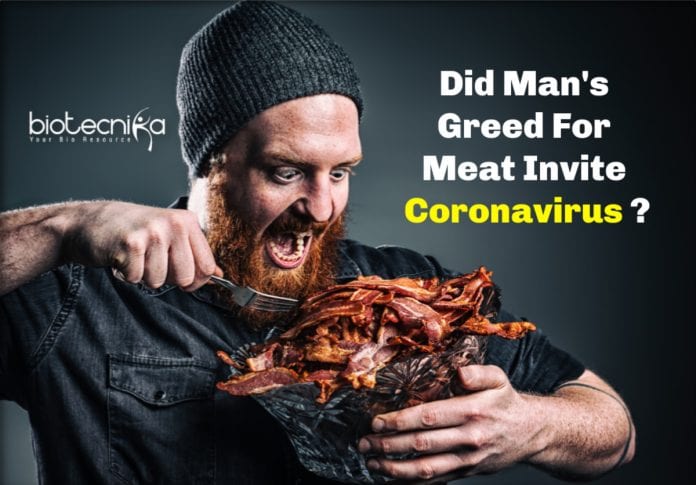 Meat Consumption And Coronavirus – Should We Stop Eating Meat?

On 2019 New Year’s Eve, Chinese health officials alerted its people of an emerging danger, an outbreak of a new type of viral pneumonia in Central China. The number of people developing fever and dry cough before getting pneumonia was growing. And it turned fatal for some. But even then, they did not expect it to become a global pandemic that killed more than 14,000 people all around the world.

Researchers later identified the virus to be a member of the coronavirus family, the same family of viruses that gave SARS and MERS before. They named the disease as Covid-19, representing “coronavirus disease, 2019”.

The likely source of the virus was found to be a food market in Wuhan, as 27 of the 41 patients had visited the market. The Chinese officials immediately shut down the market, even though the findings were not conclusive. But they had experienced something similar back in 2002 when the SARS outbreak emerged from a similar market in Southern China and killed around 800 globally.

Now 18 years later, another virus from the same family has already infected more than 3 lac people around the

So why is this happening in China? What do these markets have to do with the SARS and Covid-19 outbreaks?

And in the case of Covid-19, there is some evidence that suggests the source of coronavirus to be bats and pangolins. Coronavirus probably went from a bat to pangolin and then jumped to humans via meat consumption.

Viruses are exceptionally good at jumping between animal species. Yet it is usually difficult for them to travel all the way to humans as they need all the intermediate hosts to encounter each other at some point.

And this is where places like Wuhan market comes to the picture. It is a wet market where live animals are slaughtered for consumption. The market provides the platform for viruses to jump from one species to another and then to humans through contact or consumption. Once the virus infects a human, the outbreak begins.

The wet markets are not limited to China, they are scattered all over the world. Yet the SARS and Covid-19 originated from China.

The Chinese wet-markets are particularly different from the rest of the world for its wide variety of animals, including wildlife. Look at the sample menu, reportedly from the Wuhan market.

The menu includes a wide range of animals from all over the world. Each animal has the potential to carry a virus to the market.

But why are Chinese obsessed with this wide range of animals on their plate? Did their greed for meat invite Covid-19?

There is a history behind the eating habits of Chinese.

The extreme scarcity of food was killing more than 36 million people in China, back in the 1970s. The Communist government who had control over the food production was failing to feed its 900 million population and that’s when they decided to give up the control in 1978 and encourage private farming.

In 1988, the government implemented a Wildlife Protection Law which designated wild animals as natural resources owned by the state. The law protected people utilizing the resources and encouraged the breeding and domestication of wildlife.

A new industry was born. Personal farms and small local farms turned into industrial-sized animal farms. Breeding and raising a large number of animals together increased the chances of spreading disease from a sick animal. More number of animals and animal species meant more number of viruses. The emergence of this new industry also promoted illegal trafficking of endangered wild animals like rhinoceroses, tigers, and pangolins to China. The wet markets were teeming with wild animals.

The SARS outbreak in 2002 was certain to happen. The outbreak that infected 1,400 across the country was traced back to a wet market in Southern China. Scientists identified civet cats as a source of the SARS virus. Markets were immediately shut down and the wildlife farming was banned.

But this did not last for long. A few months after the SARS outbreak, the government brought 54 species of wildlife animals, including civet cats, back to farming. The wildlife-farming industry was worth $100 billion yuan by 2004 and it grew over the years as it exerted significant influence over the Chinese government. The government approved even the farming of endangered animals like pangolin and tigers in 2016. As a result, the industry had grown to 148 billion yuan by 2018.

Following the Covid-19 outbreak in 2020, the government shut down thousands of wet-markets and banned the trade of wildlife again. But this time China might permanently amend the Wildlife Protection Act as many organizations around the world as well as a huge number of people through the Chinese social media are requesting to ban the wildlife trade and meat consumption in China following the coronavirus outbreak. Unless the government makes permanent changes to the law, such outbreaks are likely to happen again.

So should we stop eating meat? Is meat unhealthy?

Around two million years ago, our vegetarian ancestors started eating meat out of pure necessity. Many plants that our ancestors relied on for food had become less available due to climate change. They had to depend on meat to survive. Since the discovery of fire, meat became a staple food of the human diet.

But over the last few years, many health risks are associated with meat consumption.

So how healthy is meat to consume?

We need to eat food for three reasons;

For energy, for special molecules and to acquire materials to fabricate our cells. Fats, Carbohydrates, Proteins and Special molecules like vitamins and minerals are essential for these three purposes to fulfill. Meat provides with most of these essential macromolecules, including all essential amino acids, minerals like zinc and iron and vitamins like B12 barely found in plants.

Vitamin C is the only essential nutrient missing in meat and found only in plants. Nutrients in meat are broken down faster than those from plants. For example, spinach contains more iron but is slowly absorbed and requires more energy to digest compared to meat. The purely meat-based diet helps Inuit to survive in extreme climate conditions. Since they consume the animals wholly, including the organs, they get every single essential nutrient including Vitamin C.

The most healthy meat to eat would be that of fish. Fish contains polyunsaturated fatty acids like omega-3, which may lower the risk of cardiovascular diseases and support anti-inflammatory immune functions. The second would be the most popular meat in the world, chicken with the least health risks.

But the high intakes of red meats like pork, veal, beef, goat, horse, and lamb and processed meats like ham, bacon, sausages, salami, and hot dogs can lead to diabetes, colorectal cancer, and early death. Moreover, wildlife animals like bats are the reservoirs of rapidly reproducing, highly transmissible viruses. Their consumption can lead to the outbreak of dangerous diseases like SARS and Covid-19.

So meat is healthy, but its health effects vary depending on what animal it comes from and how it is prepared.