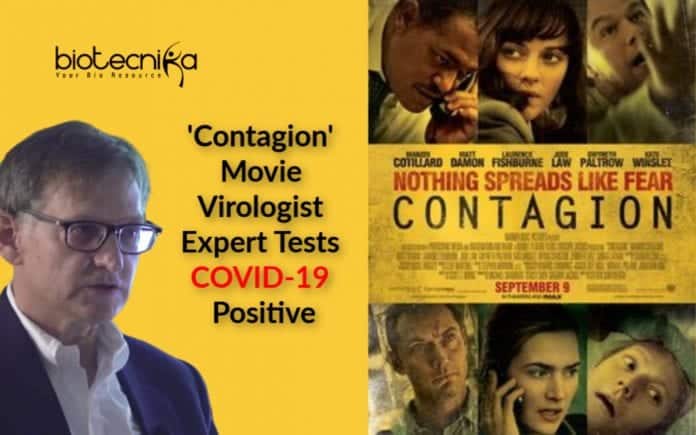 Ian Lipkin, an epidemiologist who served as the medical consultant for the Hollywood drama “Contagion” has tested positive for Covid-19.

The movie directed by Steven Soderbergh was a thriller about the spread of a highly infectious deadly virus. The movie had received much public attention after the coronavirus outbreak and is enjoying a spike in popularity.

During an interview with Fox Business, Lipkin (68) revealed he had tested positive for Covid-19. IndieWire reported that Lipkin had an idea about where he contacted the infection, but he refused to disclose.

He revealed on the show that the coronavirus pandemic has become very personal to him too, as he has tested positive for Covid-19. During the interview, he conveyed the message that if the disease can hit him, it can hit anybody.

Lipkin also pointed out how important it is for the people to coordinate with the restrictions enforced in the country. Unless we continue with the porous borders between cities and states, we are not going to get out of this situation, he added. According to Lipkin, what Chicago, New York, and Wahington have done so far was very helpful and he would like to see that implemented across the United States.

Lipkin was one of the leading figures in the scientific studies of the SARS 2000 virus and the West Nile virus. He has served as the director of Columbia University’s Center for Infection and Immunity.

He was there in China when the coronavirus outbreak emerged in January and had self-isolated himself for two weeks. He also had predicted the coronavirus becoming a pandemic, which came true after spreading to more than 180 countries around the globe.

Lipkin agreed to work on Soderbergh’s movie “Contagion” on the condition that it would accurately represent the science behind the spread of the virus.

Until today, the deadly coronavirus has infected more than 4.5 lack people globally and killed 21,571 since it first emerged in the city of Wuhan in China.