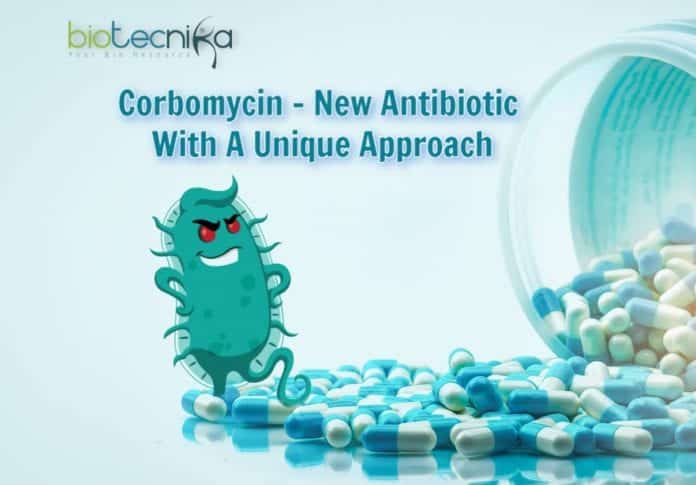 Scientists discovered a new antibiotic that attacks and kills bacteria through a unique approach.

The newly developed antibiotic ‘corbomycin’ is a promising candidate to tackle the emerging issue of antibiotic resistance in pathogens.

The new antibiotic, along with a less popular complestatin, blocks the function of bacterial wall, eventually killing them. This is the first time scientists are observing such a phenomenon.

The cell wall that surrounds the cell giving them shape, is the source of bacteria’s strength.

Usually, antibiotics like penicillin prevent the bacteria from building this wall. But the new antibiotic they discovered does just the opposite, prevents cell wall from breaking down.

Breaking of the cell wall is crucial for the bacteria cells to grow, divide, and expand. The bacteria get trapped if the cell wall can’t be broken as they can’t divide and grow. Complestatin and the new antibiotic corbomycin belong to the same family of antibiotics produced by soil bacteria called glycopeptides

Staphylococcus aureus infection that can lead to toxic shock syndrome and blood poisoning can be blocked in mice using these new antibiotics.

Beth Culp, a Ph.D. candidate at McMaster University in Hamilton, Ontario, said that this approach could be applied to other antibiotics and help to discover new antibiotics with a new mode of action.

Scientists were able to find a few more antibiotics with a similar mechanism in the same family.

The research work published in Nature received a positive response from many experts in the field.

The discovery of this new antibiotic is an exciting development, according to Dr. Andrew Edwards, from the Department of Infectious Disease at Imperial College London. The new antibiotic could be effective against many problematic bacteria, including MRSA.

Unfortunately, they are not effective against bacteria like E.coli that cause bloodstream infections in more than 30,000 people in the UK every year.

But the antibiotic shows activity against gonorrhea causing bacteria that is frequently resistant to antibiotics.

The experts in the UK were worried about the increasing rates of sexually transmitted infections, as three cases of drug-resistant gonorrhea were reported in 2018. Since 2009, the number of gonorrhea cases has jumped by 249 percent.

The new antibiotic has to travel a long and challenging road to get approved in clinical trials. Many antibiotics fail clinical trials as they were found to be insufficiently effective or too toxic in humans.

Many scientists like Brendan Wren, professor of microbial pathogenesis at the London School of Hygiene and Tropical Medicine and Dr. Claas Kirchhelle, Oxford Martin Programme on Collective Responsibility for Infectious Diseases and Lecturer of the History of Medicine, University College Dublin welcomed the study.

But we will have to wait and see if the new antibiotic can actually make it to the market because only a very few among the thousands of pharmaceutical compounds discovered get licensed.