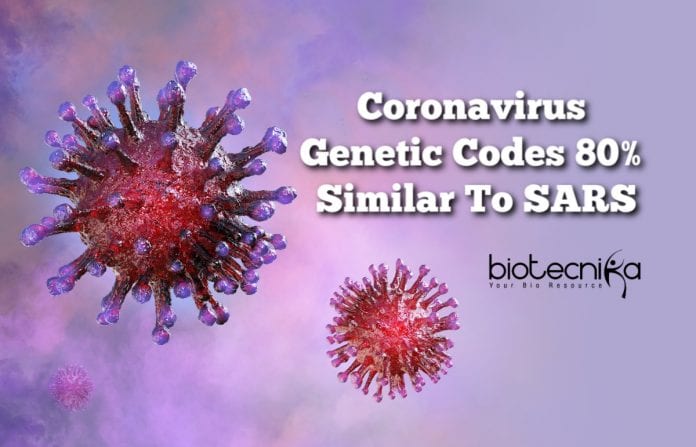 New research shows a potential way to neutralize the coronavirus as they found that the genetic code of the Wuhan coronavirus is about 80% similar to SARS.

In two important ways, the novel coronavirus in China appears to be similar to SARS:
1. 80% of their genetic codes are similar,
2. Both the virus originated in bats.

The journal Nature published the findings of a pair of studies on this on Monday.

In a press release, a virologist at the University of Reading in the UK who was not affiliated with the study said, “The novel coronavirus, in essence, is a version of SARS that causes less damage but spreads more easily.”

Jones added, “This indicates that the vaccines developed and the treatments for SARS should work for the coronavirus in Wuhan.”

‘A version of SARS’

named 2019-nCoV) is seen similar to SARS and bats were the original hosts of both the viruses. The viruses then infected other animals via their saliva or poop, and the virus is transmitted to humans by unwitting intermediaries.

Jones said, “The closest relative of 2019-nCoV seen previously in people is the bat virus, which caused an epidemic in 2002 and 2003, the SARS-CoV.”

The complete genomes of coronavirus samples collected from patients at the early stage of the outbreak were examined by the scientists to determine the origin of the new coronavirus.

At the Wuhan Institute of Virology, scientists looked at virus samples from seven patients that initially reported cases of severe pneumonia. Out of the seven patients, six patients were the people who worked the place which is thought to be where the outbreak started, the Huanan wholesale seafood market in Wuhan, China. In this first study, about 70% of the samples had their genetic sequence was 79.5% similar to SARS and were nearly identical to each other.

It was also found by the researchers behind this study that 96% of the genetic codes of 2019-nCoV is nearly identical to other coronaviruses circulating in Chinese bat populations.

Scientists from the Chinese Center for Disease Control and Prevention and Fudan University in Shanghai, in the second study, examined a 41-year-old male who also worked at the market. With symptoms of respiratory illness and fever, he checked into a Wuhan hospital on December 26. It was seen that 89% of the virus that infected him was similar to beta coronaviruses, a group of SARS-like coronaviruses that had previously been found in Chinese bats.

How coronaviruses jump to people

A virologist at Rocky Mountain Laboratories, Vincent Munster said that only beta coronaviruses can nest in our respiratory tracts and can jump to humans.

This is because the shapes of coronaviruses are different. The shape of the virus is circular and the circular shell has spike-shaped proteins that help it to attach to a host’s cell. The virus cannot spread if the shape of the spikes’ does not fit receptors on a the cells of a potential host.

But sometimes, the virus can dock in a new host as it’s proteins’ shape gets altered when the coronavirus mutates.

The lead author of the study, Zheng-Li Shi examined seven virus samples and showed that both the new coronavirus and SARS can dock to the same receptor, called ACE2, deep in people’s lungs. This is why pneumonia-like symptoms are seen in patients.

The new virus’ similarity to SARS could be a beneficial

The authors of the new studies say that the potential treatments for SARS might also work for the novel coronavirus because SARS and the Wuhan coronavirus bind to human cells, in the same way.

Shi and her co-authors wrote that the drugs and pre-clinical vaccines researchers have been working for SARS could probably be applied to this virus.

It is just a hypothesis for now as there is still confirmation needed on the ability to use SARS antibodies to treat 2019-nCoV.

Two other potential ways to treat the new coronavirus were also suggested by the study authors.

They wrote that in patients who have already been infected with 2019-nCoV will have proteins used by our immune systems to fight off bacteria and viruses, the antibodies, which will have the potential to neutralize the virus.

The authors added that another type of coronavirus antibody showed to neutralize 2019-nCoV. Horses produced these antibodies. The SARS virus was combated with this horse antibody previously.

The unique threat of bats

The coronaviruses that pose a pandemic risk are the ones that originate in animals as all coronaviruses are not deadly like the common cold, often considered inconsequential.

A virologist at the Erasmus Medical Center in Rotterdam, Netherlands, Bart Haagmans said, ” In humans, specific immunity to these viruses is absent because these viruses have not been circulating in humans before.”

The authors of the second study wrote, “The ongoing capacity of viral spill-over from animals to cause severe disease in humans is highlighted in this outbreak.”

However, the animal species that enabled the new coronavirus to spread from bats to people has not yet been confirmed.

However, there are some new clues offered by Shi and her colleagues’ new study.

The genetic information from the novel coronavirus indicates that in people, it can bind to the ACE2 receptor as well as to the same receptor in civets, pigs, and bats. The intermediary species for SARS was a weasel-like mammal, civet.

These three species can be considered as possible intermediaries with this information and the virus’s similarity to other bat coronaviruses.

According to the Johns Hopkins Center for Health Security, “Theoretically, direct transmission of CoVs to humans from bats is also possible.”

A group of scientists on January 22, who edit the Journal of Medical Virology suggested that the Chinese cobra could be the intermediary species in the coronavirus outbreak. “However, this new information about the virus’ genome indicates when compared to the more exotic hosts that were considered earlier in the epidemic, this virus is not really compatible with those hosts, said Skinner.”

Taking the DNA samples from animals sold at the Huanan wet market and from bats in the area seems to be the only way to be sure about where the virus came from.