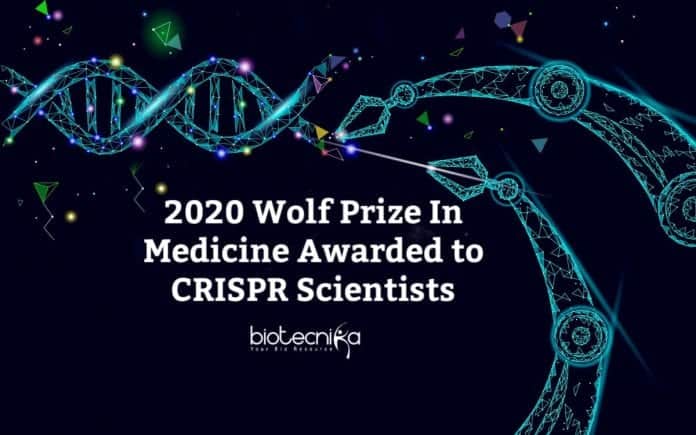 An international recognition, the Wolf Prize is a prestigious award bestowed upon scientists for their contributions to society. This award has been granted by the Wold Foundation since 1978 in Israel. The award is named after the inventor Ricardo Wolf. This year’s laureates were announced on Monday by Nobelist Prof. Dan Shechtman, the chairman of the foundation. For the year 2020, the Wolf Prize in Medicine went to Emmanuelle Charpentier of Max Planck Institute “for deciphering and repurposing the bacterial CRISPR/Cas9 immune system for genome editing” and to Jennifer Doudna of UC Berkeley “for revealing the medicine-revolutionizing mechanism of bacterial immunity via RNA-guided genome editing”.

A radical breakthrough of this century is the discovery of the CRISPR/Cas9 system. In bacteria and archaea, initially, the CRISPR/Cas9 system was identified as a highly specialized adaptive immune system but soon it was adapted as a gene-editing tool in other organisms. A guide RNA and Cas9 enzyme able to edit/repair the genome with near precision and relative simplicity were previously unheard of. This technology is expected to truly revolutionize medicine with newer research providing regular upgradations and it has already started to impact modern biology. In demonstrating that the CRISPR/Cas9 bacterial immune system could be tailored to edit any DNA region of one’s interest, collaborators

Doudna and Charpentier have played a pivotal role among the various people who have shaped this rapidly growing field. In 2012, their results were published in a seminal Science paper.

The CRISPR technology is also under the heavy danger of being misused due to its potency. There have been a few scientists have been found guilty of breaching the line as its ethical implementation is yet to be properly delineated. Prof. Doudna is also recognized for her efforts in seeking global involvement in drafting ethical guidelines for CRISPR usage with this award. The award ceremony is scheduled on June 11, 2020, at Jerusalem and each laureate will receive a certificate and $100,000 prize.