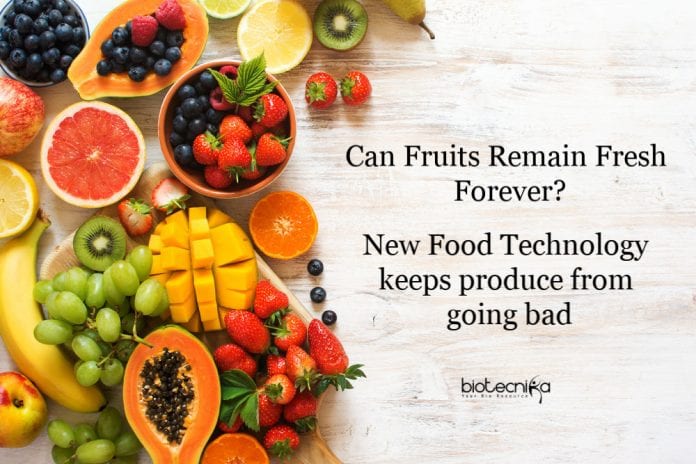 Imagine having fruits that never go bad! New food technology has sachets that can keep any produce from going bad.

The CEO of Chicago-based Hazel Technologies, Aidan Mouat has a new technology in his company which makes a product that can extend the shelf life of all kinds of produce from cherries, avocados, broccoli, pears. This works by slowing down the decay-causing chemical process. For reducing the number of fruits thrown by retailers or to send their produce longer distances, some of the world’s largest growers have made use of it.

Experts say, the key weapon in the battle against massive food waste in the U.S. is seeking ways to slow the spoilage of produce and other perishables, and Hazel Technologies is a part of this new wave of innovation to find ways to achieve less spoilage.

According to the government estimations, nearly half of produce, and as much as 40% of food produced annually in the U.S. goes uneaten. According to ReFED, a Berkeley, Calif.-based nonprofit that seeks solutions to reduce food waste, the waste happens throughout the supply chain, the vast majority of the $218 billion worth of uneaten food annually gets tossed at home or at grocery stores and restaurants. The major component of landfills and squanders the energy and water used to transport and grow it is the uneaten food.

The director of capital and innovation at ReFED, Alexandra Coari, said solutions to prevent waste at the source, such as by extending its shelf life have some of the greatest economic value per ton and net environmental benefit.

In 2015, a group of Northwestern University graduate students founded Hazel and in 12 countries in South and North America, it has about 100 clients.

The company makes small sachets, changes the atmosphere in the storage box but not the food itself by continuously emitting a small quantity of an ethylene inhibitor. The sachets are small in size, they can be thrown into a box of produce to shut down the food’s response to ethylene, a chemical naturally emitted by many fruits and vegetables that triggers the loss of firmness, texture, and color.

Hazel’s sachets are gaining fans even though ethylene management technology isn’t new because the sachets are easy to use.

Mouat, who graduated from Northwestern with a doctorate in chemistry in 2016 said, The shelf life of any produce can be extended by targeting the specific mechanism that causes it to go bad and integrating it with the packaging that already exists today.

The largest packer, grower, and shipper of Hass avocados in the world, Mission Produce, used these sachets. The senior director of business development at California-based Mission, Patrick Cortes, said when treated with Hazel’s product, ripe avocados, which normally would have to be sold in two to five days once in stores, lasted seven to 10.

Cortes said, on average, the retailers in U.S. waste about 5% of avocados and it also has an impact on the environment. Helping the retailers save money by reducing the thrown avocadoes and being able to retain its freshness when traveled long cross-ocean journeys, by investing in the technology, is the mission.

Yet, there is a long way to go for the industries to adopt this technology. If it involves training seasonal workers or installing equipment or, it can be expensive and complicated to introduce shelf life extension technologies into the supply chain.

Hazel has the advantage here. Suppliers and growers have tried many alternatives and say they have found the flexibility and user-friendliness of Hazel’s technology much of a better option.

The director of packing operations at Orchard View Cherries in Oregon said, “It may not be worth it if it is not simple and easy to use.”

Two years ago a small trial with Hazel was conducted by Orchard View and there was an improvement, primarily for cherries embarking on ocean trips to Asia that can take up to 23 days and this year has more than doubled its use.

Ortega said, “aesthetics matter, as even if the produce is perfect, consumers usually reject the produce which does not look good. After 20 days, the untreated cherries were found to have lesser greener stems and indentations when compared to the cherries treated at the end of the packaging process which was firmer. We felt more confident in shipping our product and it was surely noticeable, the fruit looked more appetizing and fresh.”

Gonzalez said, “Large market share can be gained there.”

Mouat said, “there are many grand ambitions of the company. For example, In India, mangoes are grown more in number than anywhere else but only 10% of it is exported and a lot of it goes to waste. He also hopes to produce a consumer-focused sachet that can be used by people by throwing it into the aforementioned banana box or in the fridge or into the veggie crisper.