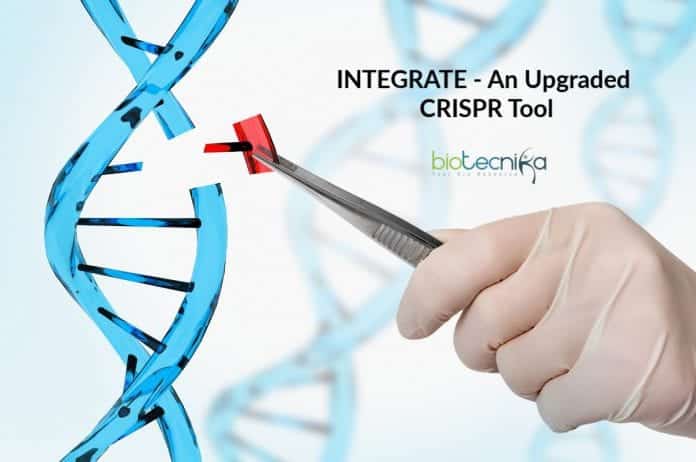 Columbia scientists developed a new gene-editing tool that could replace the current CRISPR- based tools and captured it’s first images. The team discovered a unique “jumping gene” in Vibrio cholerae bacteria that insert large DNA sequences in the genome without introducing DNA breaks. The scientists named the tool INTEGRATE after “Insertion of transposable elements by guide RNA-assisted targeting. Published today in Nature, the study involves the use of cryo-electron microscopy, a Nobel prize-winning technique that reveals the high-resolution details about how INTEGRATE works.

The scientists showed how INTEGRATE could be used to maximum advantage to insert DNA fragments to specific targets in bacterial cells.

The model revealed that the system consists of two main parts arranged in a helical filament. A cascade occupies the larger portion winding around and carrying a guide RNA that scans the genome for the target sequence, similar to the CRISPR system. Once the upgraded CRISPR machinery locates and binds the matching sequence, it guides the DNA strand through the TniQ “transposition” proteins that sit on the end of the complex and recruit other enzymes that help modify the sequence.

Tyler Halpin-Healy, a cellular, molecular, and biophysical Ph.D. student at Columbia University Irving Medical Center and first author of the study, said, “Visualizing biology on this scale is truly amazing and can easily excite even those unfamiliar with the topic. The quality of this work, and the speed at which it was accomplished, is emblematic of the collaborative environment afforded by great mentors like Sam and Israel.”

Sternberg and colleagues had previously proposed the functional link between CRISPR machinery and transposition machinery. The current study proved their hypotheses right.

CRISPR has become a widely accepted gene-editing tool across the world. It is quick, cheap, and precise. However, in most of the CRISPR applications, both the DNA strands are cut, and DNA break is left for the cell’s own machinery to repair. This remains a major challenge in the technique and could lead to undesired gene edits as well. The current CRISPR machinery is not efficient enough to precisely insert large genetic payloads. Enhancing the gene-editing accuracy of CRISPR was a priority for researchers as its essential to ensure the safety of therapies that involves gene editing.

The new INTEGRATE system for gene editing does not rely on cell’s machinery for repair, and could be used for inserting large DNA sequences. This upgraded CRISPR system is more accurate and efficient in inserting genetic sequences compared to the conventional CRISPR-Cas system. This system allows scientists to carry out genetic modifications in all types of cells, including the cells that have limited repair activity like neurons, where CRISPR wasn’t that successful.

The major challenge in CRISPR being the off-target edits; the structure unveils how TniQ and Cascade can work together to achieve accurate gene editing preventing any off-target DNA insertions. The researchers plan to explore further the possibility of a proofreading checkpoint that’s highlighted in the structure.