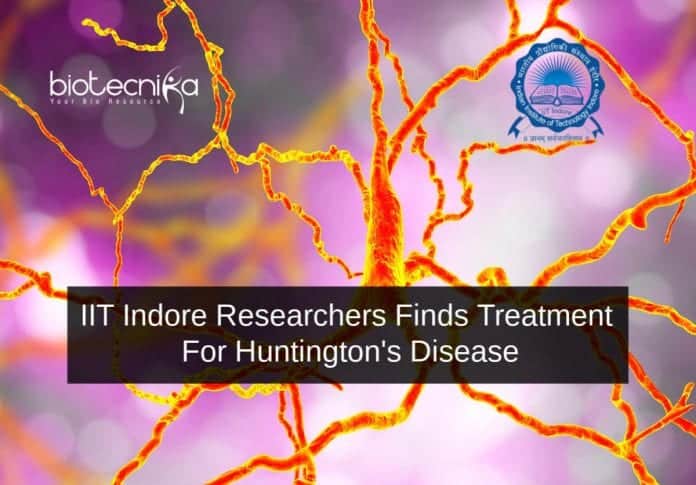 Scientists from the Indian Institute of Technology, Indore have identified three chemical molecules that could potentially be used to arrest Huntington’s disease progression.

Huntington’s disease is a genetic disorder that includes walking abnormality, muscle spasm, hallucinations, depressions, and tremors. It is caused by a type of gene mutation called trinucleotide repeat expansion in a gene named huntingtin gene. It has a prevalence of five to 10 cases per 100,000 worldwide, which makes it the most common inherited neurodegenerative disorder.

The IIT Indore Researchers had previously found that a naturally available molecule called Myricetin could help in arresting the progress of this neurodegenerative disease.

Myricetin is a member of a family of chemicals called flavonoids. They are known for their antioxidant properties. It is commonly available in daily diets, including vegetables, fruits, nuts, berries, and tea. It is also found in red wine.

Dr. Amit Kumar, Associate Professor of Biosciences and Biomedical Engineering at the Indian Institute of Technology, Indore led the research. The team examined a database of 2.5 million small molecules maintained by the United States of America’s National Cancer Institute. This time the group adopted a unique methodology. They considered that chemical molecules could be easy to manufacture in contrast with the naturally occurring molecules.

Dr. Kumar and the IIT Research team observed that that 38 molecules shared planar structure and chemical similarity with Myricetin. These molecules, similar to Myricetin, were further screened. Out of the 38 molecules, three were found to be effective were found to reduce the pathogenesis of the disease both in cellular models of Huntington’s disease and a cell line derived from persons suffering from the disease.