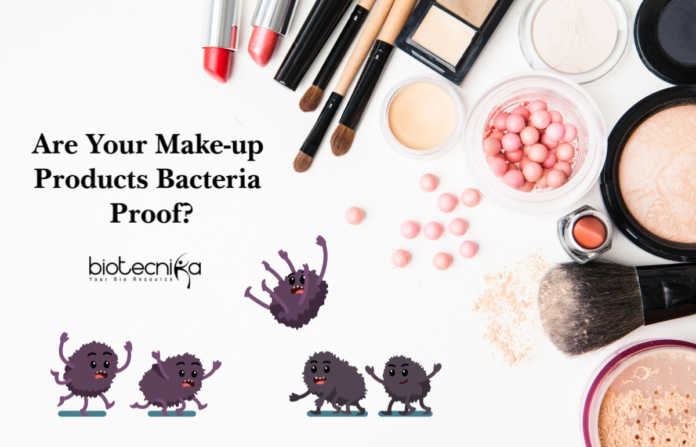 Dangerous Bacteria in Makeup Products – Microbes in Your Makeup

Journal of Applied Microbiology published this study. The scientists at Aston University in the U.K. tested makeup products and found bacterial presence in almost all of the tested products. The bacteria found in them can potentially cause skin infections, if they are used near the mouth, eyes or any cut, grazed skin, they could also cause blood poisoning.

People who are more susceptible to contract infections and who are immunocompromised are at higher risks of being affected by bacteria which would be otherwise normally taken care of by the immune system. The presence of such dangerous bacteria in makeup products does not necessarily mean people would get sick and currently, substantial research is lacking correlating this.

This study comprised of about 467 individual makeup products, which had products like blending sponges used for applying makeup like foundation on the face. The highest level of harmful microbes was to be found on these sponges, mostly because these sponges are left damn after using which creates a breeding ground for harmful bacteria.

The study found that almost 93% of the people who used these sponges never had them cleaned, and about two-thirds of them had at some point dropped their spongers on the ground, which further adds to the possibilities of dangerous microbes being present in them.

The lead author of this study, Dr. Amreen Bashir from Aston University’s School of Life and Health Sciences says, “The reason for bacteria in make-up products is due to the poor hygiene of consumers while using make-up, particularly while using the beauty blenders is worrying after finding the presence of harmful bacteria such as E.coli(which is linked with fecal contamination) breeding on the tested products.”

Around the world, the need to mention expiry dates on makeup products varies. A “date of minimum durability” or “period after opening” or “best used before the end of” is required to be present on most of the cosmetic products in the European Union for showing how long the product can or should be used. However, according to the FDA, there are no such regulations or laws in the U.S. which specify the life of the product or its expiration date.

Dr. Bashir said that there still a lot to be done in educating consumers and the make-up industry about the necessity to regularly was these beauty blenders or the blending sponges and importantly letting them completely dry to prevent any bacteria in the make-up products, along with educating the risk of using a product beyond its expiry date.