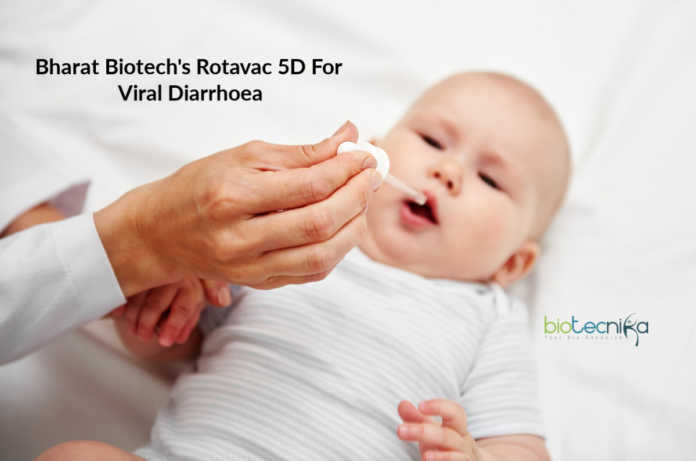 On Tuesday, Bharat Biotech launched its new Rotavirus vaccine Rotavac 5D against viral diarrhea, which is more advanced but with a lower dose of .5 ml while the competitor vaccines are at 2-2.5 ml per dosage. The Rotavac 5D is a concentrated version of the previously available vaccine.

Through a study, they realized that most of the children are not able to consume a 2ml vaccine, and they spit it out. Most times, nurses were in a dilemma whether they should re-administrate the vaccine again or not. Bharat Biotech had given the instructions not to provide the vaccine again. To resolve this issue, they developed a more concentrated version of the vaccine to .5 ml. Also, the high volume doses consumed more storage space as compared to the .5ml multidose packages.

Countries like South America, Africa, and Central Asian countries have expressed their interest in the newer vaccine.

The current Rotavac vaccine requires minus 20-degree Celcius for storage, which is the same as that of the oral polio vaccine. But the new version Rotavac 5D requires only 2 to 8 degrees Celcius as that of a typical refrigerator.

Most vaccines like HPV, pentavalent, injectible polio vaccine, or pneumococcal (for pneumonia) are stored between two-eight degrees Celcius which is the latest choice. Currently, the Rotavac vaccine is provided to the government for a price of 70 per dose, but Rotavac 5D will be slightly costly for a price of 105 per dose. And the Rotavac 5D will be supplied to private sectors for a ten times higher price of 990-1100 per dose.

The Bharat Biotech facility at Hyderabad has the capability of producing up to 200 million doses of both Rotavac and Rotavac 5D. Although Rotavac 5D for viral diarrhea was licensed in India in August, the government is still relying on Rotavac. But the company is ready to supply the new Rotavac to the government how much ever necessary.

The company will not be supplying the new vaccine to the UK or Europe for now since more clinical trials on the local population are required for that. The officials from the Bharat Biotech said that they dont have the resources right now to expand the market to western countries.

M Santosham, Professor at US-based John Hopkins University, reminded about the increased number of child deaths associated with the rotavirus vaccine in the 1980s. The Rotashield by Pfizer had caused the development of a condition called Intussusception in children. Intussusception entails the prolapsing of one section of the intestine into another, creating a blockage. While this condition develops in babies in normal circumstances also, an increased number of incidents were reported in the 1980s, which was later reported to be associated with the vaccine. The professor also added that the safety of vaccines had increased enormously now.

Bharat Biotech tested the Rotavac vaccine in 6800 children between 2011 and 2013. None of the children developed Intussusception during the first 21 days. In the vaccinated arm, though, there were eight cases, while in the placebo arm, there were three cases. Because the vaccinated arm was double the placebo arm, there is no significant difference in the case of Intussusceptions, and the association to vaccination was ruled out,” the official said.