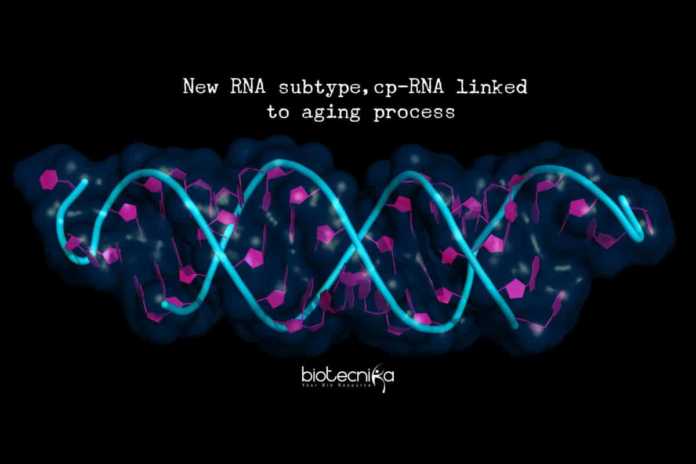 RNA role in aging: A new RNA subtype, cP-RNA discovered by researchers at the Thomas Jefferson University, may play a vital role in aging processes.

The master plan for all our body parts, from eyebrows to toenails, is all in the genome. But just the genome’s blueprint is not the only aspect that determines what is built. All the cellular players, add their interpretation to the design by drawing instructions from the blueprint, and scientists are still finding the new players. With the help of modern technology, researches at Thomas Jefferson University have discovered an ocean of new subtypes of RNA(Ribonucleic acid) molecules in the cell, and they have evidence that suggests that these RNA subtypes may be involved in the aging processes.

Senior author Yohei Kirino, Ph.D., an associate professor in the Department of Biochemistry and Molecular Biology and Jefferson’s Computational Medicine Center, says, “There has been a lot of research done on the most famous short RNA known as the microRNA.” MicroRNA is so powerful that it can silence messenger RNA, diverting the production of specific cellular components encoded by the genome, and they can be studied with established methods. The researchers wanted to know what the other short RNAs, which are more difficult to capture short, do in the cell. Their study began to answer this question.

This research was published in PLOS Genetics on January 13th.

Dr. Kirino studied the subtype of RNA that has been found to have a role in aging, called cyclic-phosphate containing RNA, or cP-RNA in short. Although researchers were aware that this unusual form of phosphate exists on RNA molecules, they considered it just as an intermediate form generated during RNA digestion. The current method to track RNA by amplifying and sequencing the molecule fails to capture RNA having a cyclic phosphate tail. “It has a tricky shape,” says Dr. Kirino.

However, three years ago, Dr. Kirino’s lab developed a system used for targeting cP-RNAs so that they could be amplified and sequenced. By making use of this method, the researchers sequenced all of the cP-RNAs present in the mouse tissues. “The complete sequencing data for this RNA subtype, is obtained for the first time,” says Dr. Kirino. This eventually led to linking the role of the cP-RNA in aging.

Several surprises were revealed by the sequencing of the new RNA subtype-cP RNA. A research associate in Dr. Kirino’s lab, Megumi Shigematsu, showed that there was a lot more of the cP-RNA than expected. It was found that various types of cellular RNAs such as transfer RNAs, messenger RNAs, and ribosomal RNAs generated numerous new RNA subtype-cP RNA species, thus suggesting that these cyclic phosphates can be involved in RNA functions with various roles in the cells.

These cP-RNAs were abundant—for example, when one cP-RNA from ribosomal RNA was compared with all of the varieties of microRNA in the cell, it was found that just one cP-RNA was 300-fold more abundant than all microRNA combined. cP-RNAs were also found throughout the tissues of the body of a mouse, including the lungs, muscles, spleen, and thymus. Finally, the researchers noticed that these abundances of cP-RNAs changed over time, decreasing in number as the mouse aged, thus linking RNA role in the aging process.

“There are still many questions about these molecules than answers we have,” says Dr. Kirino. “But with their abundance, their presence in tissues throughout the body, and with the information that their numbers change as tissues age, we see a vast area that needs further exploration.”

Along with finding the RNA role in aging, Dr. Kirino’s lab is exploring how cP-RNAs play a role in asthma, infectious disease, and cancer.