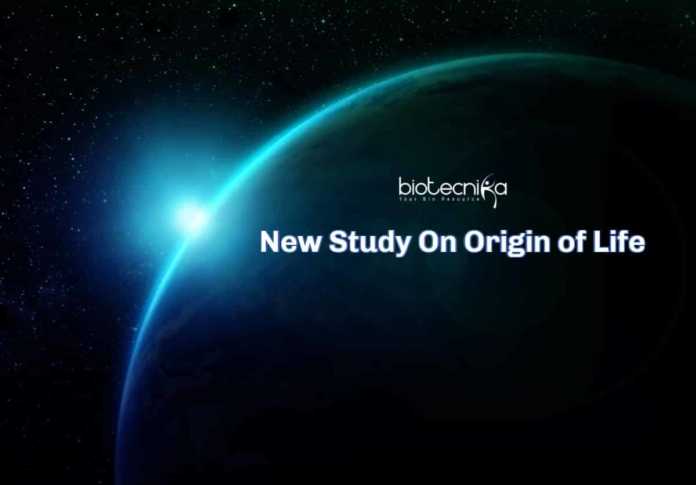 New Study On Origin of Life

Scientists at the University of Wisconsin–Madison have cultivated lifelike chemical reactions while pioneering a new strategy for studying the origin of life.

The study shows that simple laboratory techniques can favor the kinds of reactions that are likely necessary to explain how life started on Earth four billion years ago.

The scientists subjected a rich soup of organic chemicals to repeated selection by regularly paring down the chemical population. They let it build back up again with the addition of new resources.

Over generations of selection, the system appeared to consume its raw materials. This phenomenon shows that selection may have induced the spread of chemical networks capable of propagating themselves.

On longer timescales, these simple chemical changes noticed in the New Study On Origin of Life oscillated in a repeating pattern. Scientists did not fully explain this cycle of chemical changes, but it is evident that the chemical soup established feedback loops resembling those found in other living organisms.

Scientists can use this research methodology and help solve what components are necessary to encourage lifelike chemical systems & whether those chemical networks can go on to evolve more complex traits.

If this laboratory system can generate greater complexity, it might help solve the puzzle of how pure chemicals eventually gave rise to complex organisms.

New Study On Origin of Life- The Simple Laboratory Experiment!

To test the idea of chemical ecosystem evolution, the University of Wisconsin–Madison researchers assembled a rich soup of chemicals in the laboratory setting. In seawater, they dissolved sugars, amino acids, trace minerals, common organic compounds, and the building blocks of nucleic acids. To give the system even more of an edge, the researchers added the rich seawater with ATP. It is a high-energy molecule that drives nearly all of life’s reactions today but was unlikely to exist in primordial times.

The research team mixed their primordial soup with fine grains of pyrite, a mineral of iron and sulfur, also known as fool’s gold. Baum’s team believes that pyrite is an ideal material for cultivating lifelike chemistry.

The scientists added a few drops of the enriched seawater soup to a small amount of crushed pyrite in a vial & mixed the solution for a few days. This was considered as the first generation.

To produce the next generation, the team took a small amount of the first generation and mixed it into a vial with fresh soup & pyrite. Over twelve or more generations, only those chemical networks that could propagate faster than they were diluted would survive.

After 12 to 18 generations, scientists saw a drop in available phosphate, including the dissolved organic material. This suggests that chemical compounds might be sticking to and spreading along the pyrite grains.

When the team further inspected the pyrite under ultra-high magnification, they saw an abundance of fractal shapes spreading along the surface of the mineral in the experimental samples but not in control samples. These samples lacked a history of selection.

When the researchers ran the experiment- New Study On Origin of Life until 40 generations, they observed periods of gradual change interspersed by sudden reversals to the starting conditions, the causes of which are unknown.

Baum and the team are now excited to refine this study further and maybe answer the question of the Origin of Life.