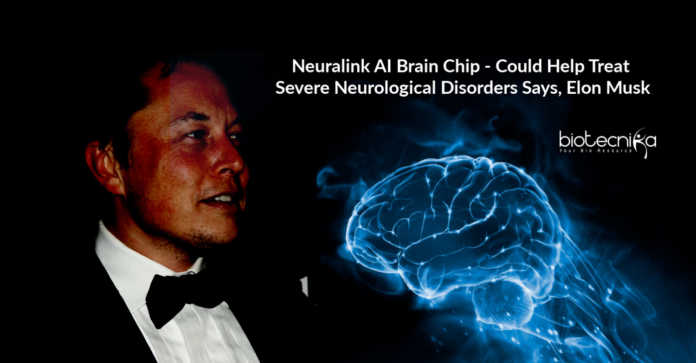 Elon Musk believes his neural technology company Neuralink will be able to “solve” schizophrenia and autism.

Speaking on the Artificial Intelligence podcast with Lex Fridman, Musk was asked what he thinks are the most exciting impacts he foresees for his company Neuralink.

Neuralink’s goal is to develop an AI-enabled chip that could be implanted in a person’s brain, where it would be able to both record brain activity and potentially stimulate it.

Elon Musk added that in the future, Neuralink would be able to solve severe brain-related diseases. That may include autism, schizophrenia, memory loss. Musk further said that everyone encounters memory loss as they age. Neuralink AI Brain Chips will help solve these problems.

It was not clear what Musk meant by “solving” autism, which is not a disease but a developmental disability.

According to the UK National Autistic Society Autism is not an illness or disease and cannot be ‘cured.’ The World Health Organisation characterizes schizophrenia as a “severe mental disorder.”

Musk founded Neuralink in 2016, and for the first few years of its existence, the company was relatively secretive.

Recently Neuralink published a white paper about its design for a brain chip. Elon Musk excitedly announced that the company had begun animal testing on monkeys.

Musk has previously said that the AI brain chip technology could be used to treat neurological conditions such as Alzheimer’s and Parkinson’s.

During his podcast session with Fridman, Musk highlighted that the brain chip from Neuralink could be used to solve “critical damage to the brain or the spinal cord.” He added that the ultimate goal of Neuralink is to merge human consciousness with AI.

Elon Musk said that humans could not be smarter than digital supercomputers; therefore, with the help of Neuralink AI brain chips, he aims is to ‘solve’ existing neurological problems.

You Can Listen To The Full Podcast Here