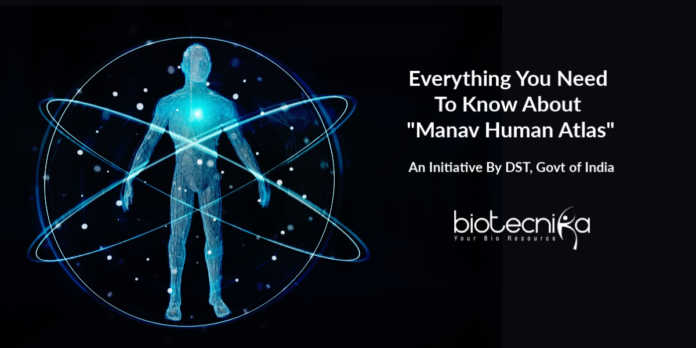 “MANAV” is derived from the Sanskrit word, which means Human /Man.

The Manav Human Atlas Initiative is a megaproject initiated by the Department of Science and Technology (DST), Govt. of India, in collaboration with a private biotechnology institute named Persistent System.

This Public-Private Partnership model- Manav Human Atlas Initiative aims to create a unified Human Atlas by mapping the molecular details of every cell, tissue, and organ in the human body by curating all the available information present in scientific literature and public database.

Recently, scientists have experienced an elevation in the amount of various biological data generation. These days numerous research articles have been published with pivotal information on human health and diseases besides spanning from single-molecule resolution to the level of the whole organism.

All these facts or knowledge gathered in different research studies are scattered in various journals, articles, repositories, and databases, etc. making it impossible to trace any particular data at the time of immediate need. Searching for seamless extraction of this scientific information, whenever needed, is not only a challenging task but also time-consuming.

Here’s A Short Video That Gives A Summary of The Manav Human Atlas Initiative:

As such, there is a high demand to collect and combine all information of several data points on human cells/tissues and disease so that academicians or clinical researchers, including teachers & students, can easily access such information from a common platform.

The Manav human atlas initiative aims to create an open and interactive atlas of human biology, compiling, curating, and synthesizing data at the molecular, cellular, tissue, and organism level from scientific literature and public databases.

The project MANAV will be executed by the Indian Institute of Science Education and Research (IISER), Pune an autonomous institute established by the Ministry of Human Resource Development and the National Center for Sciences (NCCS), another independent institute aided by the Department of Biotechnology, Ministry of Science and Technology.

The premier institutes will impart training to students while Persistent System will provide the technology platform and data management.

The Manav project initiative will create an educated population of a biologist possessing the skill of data curation and analysis.  The skillset acquired will help students & researchers with better opportunities for jobs in the Life Science sector.

A similar Human Cell Atlas Project was launched in the year 2016 by collective efforts of world-leading scientists to generate data about cellular and molecular activities of various cell types in the body in both it’s healthy and disease state with the help of single-cell genomics.

Manav Human Atlas Initiative was launched to create a unified database of molecular networks of all the tissues in the human body and to derive a holistic picture of the working of the human body.

Depending on the knowledge already available in various scientific literature and research articles that are presently lying unstructured and unorganized, the project MANAV will collate and integrate molecular information on human tissues and organs.

As all the findings generated will pass through multiple levels of reviews, ultimately, it will be an Atlas or an authenticated collection of human body tissues. These data can be applied for future research work as well as by drug and clinical developers for experimental purposes on human bodies in disease conditions.

When this database on individual tissues are ready, it will be easy to trace the causes of disease, their specific tracks and finally convert the disease stage linked to tissues and cells. It may also be examined whether any potent elements or molecules have been used in the form of drugs to target the specific cells or tissues.

The Manav Human Atlas Initiative will be executed in four steps: –

At present, the project is in the beta testing mode, where students are undergoing training at NCCS, Pune, to analyze the molecular data related to research on human skin.

The mission of the Manav Human Atlas Initiative At A Glance

Data thus created are used to assign cells, tissues, and organs related to human skin via the newly created annotation platform. The findings thus obtained from the students will be checked by teachers and scientists. This feedback from the researchers would help in fine-tuning the system. It is planned that in the future, this training will be conducted through webinars so that more students across the country may be involved in this project.

The methodology adopted in Manav Human Atlas Initiative, including the technology and platform used, can be extrapolated in other national or international science projects in Life Sciences such as biodiversity, ecology, environment, etc.

Researchers will get immense help from this project in understanding the differential molecular factors which vary between diseased states versus a healthy state of an organ or a tissue.

About the Author
Dr. Priyanka Sen Guha has

completed her Ph.D. in Botany with specialization in plant molecular biology. Her work revolves around transgenic plants with expertise in plant tissue culture and cloning. She has a keen interest in understanding the latest developments in Plant molecular biology and is very passionate about educating the same to her students.