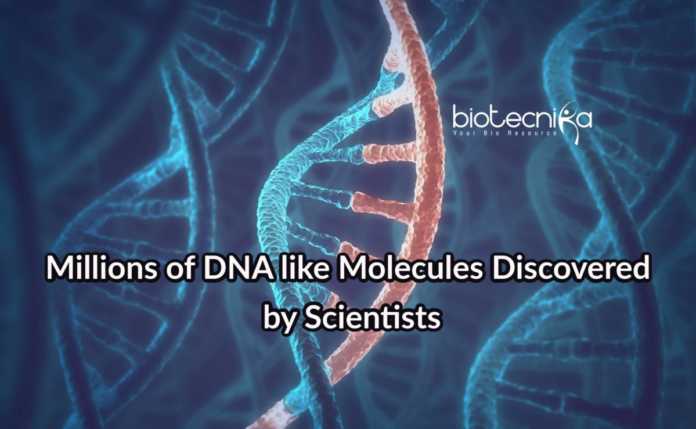 DNA and RNA are believed to be the genetic material that encodes hereditary information until now.

But are there any other biological material that stores hereditary information along with DNA and RNA?

Nucleic acids are the key targets for pharmaceutical research. Synthetic molecules that can imitate the function of nucleic acids are widely used for the treatment of viral infections like HIV. Yet the possibility for alternatives of nucleic acid to store hereditary information was unknown.

Researchers at Earth-Life Science Institute (ELSI) at the Tokyo Institute of Technology, the German Aerospace Center (DLR) and Emory University explored the “Chemical Space” of nucleic acid-like molecules. The word “Chemical Space” refers to the DNA like molecules discovered which are structurally and functionally similar to the nucleic acids. They were surprised to identify over one million variants of such molecules suggesting unexplored chemistry relevant to biochemistry, pharmacology, and the study of the origin of life on earth. The study of such molecules could help develop potential therapeutic drugs.

Although nucleic acids were initially discovered in the 19th century, their biological role, composition, and functions were not known until the 20th century. Watson and Crick unveiled the double-stranded helical structure of DNA in 1953, which later explained the regulation of biological functions.

DNA, the Deoxyribonucleic Acid, stores the genetic and hereditary information in most of the living organisms. They are double-stranded and helically wrapped with the capability of replicating each strand to generate two copies of DNA.

DNA, the polymer is composed of four nucleic acids “Adenine,” “Guanine,” “Cytosine,” and “Thymine” arranged in a sequence along the length of the polymer. These sequences are precisely duplicated with almost no errors during the DNA replication. They are later copied to RNA and then read into protein sequence. The proteins control the whole biological system in the organisms.

Occasionally, errors could happen during the replication resulting in positive as well as negative impacts in the organisms. Positive impacts alter the genetic sequence evolving the organisms to a fitter generation. Evolutionists call this process as “Natural Selection.”

But are DNA and RNA the only genetic material to store hereditary information? Or the best means discovered and explored until now?

There are two kinds of genetic material discovered to date, RNA and DNA. The scientists at the Tokyo Institute of Technology were trying to find if there is one more possible genetic material. Professor Jim Cleaves of ELSI finally answers this with excitement that there could be millions of DNA like molecules to be discovered.

Biologists had been wondering since 1953, why just DNA and RNA? Aren’t there any other molecules that could perform the function? Or others were selected to extinct during the evolution?

Nucleic acids play an essential role when it comes to therapeutics. Most of the significant antiviral drugs are the analogs of nucleic acids, including the drugs treat herpes, viral hepatitis, and dreadful HIV. Nucleic acid analogs are also used for cancer therapy since some of the cancers have genetic mutations that cause the DNA to replicate abnormally.

Co-author Chris Butch, formerly of ELSI and now a professor at Nanjing University, said that understanding hereditary is fundamental research, but it has very important practical applications also.

Basis of Biology is the heritable information, which makes natural selection possible. Scientists have also tried making DNA or RNA from simple chemicals by mimicking the early environmental conditions on earth. Most of them believe that RNA was evolved from DNA for some unknown reasons. However, the evolutionary research split into two in the 1960s: those who thought RNA to be the answer to all questions regarding the origin of life and those who found it difficult to believe in RNA’s potential.

Dr. Jay Goodwin from Emory University, one among the scientists behind the discovery of DNA like molecules – commented, “It is truly exciting to consider the potential for alternative genetic systems based on theses nucleoside analogs—that these might possibly have emerged and evolved in different environments, perhaps even on other planets or moons within our solar system. These alternate genetic systems might expand our conception of biology’s ‘central dogma’ into new evolutionary directions, in response and robust to increasingly challenging environments here on Earth.”

It is absolutely fascinating that modern computational techniques could discover alternate genetic materials that can instigate the synthesis of new therapeutic drugs.