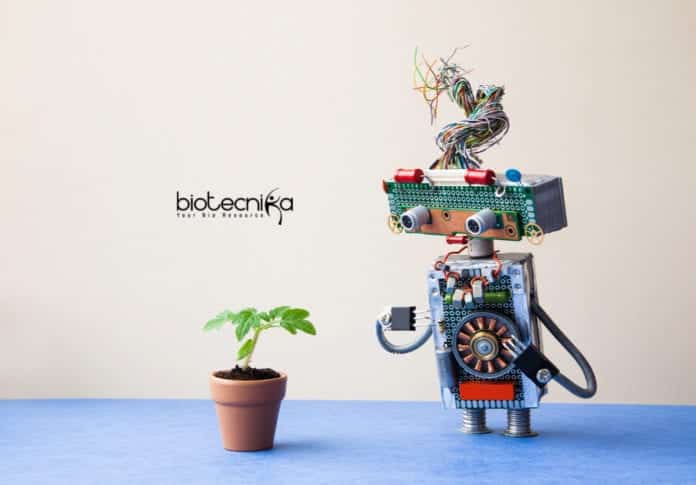 A team of researchers from Salk has helped speed up plant phenotyping, with machine-learning algorithms that teach a computer system to analyze 3D shapes of the branches and leaves of a plant.

The new method may help scientists better quantify how plants respond to climate change, genetic mutations, or other factors.

Researchers are trying to understand plant growth, engineer more resilient plants, and boost crop production. They often want to measure the detailed characteristics of a plant’s leaves and shoots. To do this phenotyping accurately, many researchers use camera systems that take images of each plant from various angles and assemble a 3D model. However, some measurements are hard to make with these stitched-together images.

Recently, some have turned to a new method, called 3D laser scanning, to capture the structure of the plant.

Scientists shine a laser at each plant to “paint” its surface with the beam. The resulting data

called a 3D point cloud portrays the fine detail of the plant’s surface. Quantitatively analyzing the point clouds can be challenging since the technology is very new and the datasets so large.

Navlakha and a team of scientists used a 3D laser scanner to scan 54 tomato and tobacco plants grown in a variety of conditions. They provided input to the resulting 3D point clouds into machine-learning algorithms that let them teach the program how to phenotype the plants. The new technique involved the researchers first indicating manually where leaves and shoots on the plants were. Then, the software began to recognize these features automatically.

The researchers focused on teaching the program to make three phenotype measurements that scientists often use. Namely- separating stems from leaves, counting leaves and their size, and outlining the branching patterns of a plant.

The method had a 97.8% accuracy at identifying stems and leaves.

Machine Learning Approach for Plants- The Way Ahead

Navlakha and the team want to continue fine-tuning the approach; differentiating two close-together leaves can still be difficult, for instance. And the current version of the software may not work on all types of plants. They hope to generalize the software to work on plants from vines to trees, including analyzing the roots.

The scientists plan to release their software as open-source for other researchers to use. They hope the software will speed up plant research since it makes high-throughput phenotyping faster and less challenging.

The work was supported by grants from the National Institutes of Health, Pew Charitable Trusts, and the National Science Foundation.

Pursue Your PhD In Singapore With SINGA Scholarship