Home Biotech News Why ISRO Does Not Hire Biologists? – Future Plans To Hire? 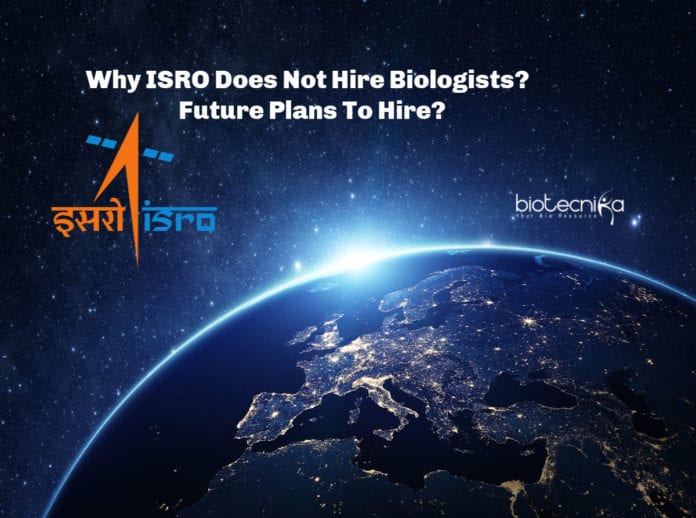 Why ISRO Does Not Hire Biologists?

For many years, man has been awed by the extent of the Universe and the secrets that it holds. Within the scientific research community in India, the one name that stands out with outstanding contributions towards this field is ISRO.

Indian Space Research Organization (ISRO) is the space agency of the Government of India. Established and modified as since 1962 as the Indian National Committee for Space Research (INCOSPAR), ISRO has the aim of space science research and planetary exploration. ISRO contributed towards building India’s first satellite, Aryabhatta, which was launched in 1975. With multiple other satellites successfully placed, followed by Chandrayaan 1, ISRO was recently in the news for its latest project on Chandrayaan 2 and Gaganyaan in the future.

The bare minimum requirement to work with ISRO is a PG degree or a PhD in the field of expertise. The individual departments have their own varied requirements from Physicians, Mathematicians to Electronic, Mechanical, and Computer Science Engineers. The goal is to be able to build vehicles and satellites with tracking systems and to be able to successfully launch them, navigate and analyze the data transmitted.

On the whole, ISRO has not had a requirement for Biologists yet. The reason being its attempts to dominate in space exploration. Once ISRO is successfully able to spread its wings in this domain, it might look more towards astrobiology as a new field.

With the rising pollution, chances of global warming have indefinitely increased, risking the lives of millions of million people and life inhabiting this planet. The only chance to offer a better environment, better resources is to first understand how it all began. Man has been spending years and decades in unraveling the truth of the universe. They have been trying to understand how these magnificent phenomena came into being and how it can be preserved. Since we are an intelligent race with good survival instinct, our first thought to save our future generations is to look for an alternative beyond what we know. The answer lies in space.

Very soon ISRO plans to launch its project Gaganyaan, which is an Indian crewed orbital spacecraft intended to be the basis of the Indian Human Spaceflight Programme. It is a fully autonomous spacecraft designed to carry a 3-member crew to orbit and safely return to Earth after a mission duration of up to seven days. This mission is said to launch by Dec 2021. It is assumed that ISRO might have the requirement for Biologists and Biotechnologists. Since the mission would occur over a period of 7 days with men on board, it would be assumed that their nutritional requirement, medicine, and health would have to be taken care of. Along with this, there might be sample collection or data analysis that would probably require the expertise of a Biologist.

“With the growing momentum to explore life on other planets and the successful start of NASA’s InSight mission on Mars, astrobiology could be India’s next frontier in space research”, – Dr. K Radhakrishnan, former chairman of the Indian Space Research Organization (ISRO) was quoted to have said at an event last year.

The burgeoning field of astrobiology studies the origins, early evolution and the distribution and future of life in the universe. It is also concerned with the hunt for life on other planets and other solar systems. “We are presently using artificial intelligence coded in robots. They have been defined tasks A, B, C, D” Dr. Radhakrishnan was quoted as saying by Deccan Herald. “If there is something new that they see, then there is a mechanism where they get back to the control room and we design a new set of tasks for them (based on their findings).”

There is huge scope in Indian space research for projects and research in astrobiology, according to Radhakrishnan, particularly studies on the toll that traveling to space and other planets for 1,000 days or more can have on the human body.

“When humans go to Mars, there will be a need to understand what changes the human body will undergo. There is a major scope for astrobiology and students should take this subject up for future research,” he was quoted as saying.

So, it is evident, that even if ISRO is not focussed on hiring Biologists at the moment, it will definitely have a requirement in the near future. To be able to contribute holistically towards scientific discoveries, it will need to focus on the biological sciences as well. For getting a chance to be hired by ISRO it is vital to have academic excellence and an aptitude for research and inventions.

About the Author
Rashmi Sanyal is one of the

most experienced senior team members of Biotecnika. Coming from a research background in cancer, she specializes in Cancer Genetics, Immunology & Developmental Biology. Her experience in the Ph.D. Exam & Selection field is vast. She has a keen interest in understanding the latest developments in the Biotech & Pharma Industry and is very passionate about educating the same to her students.