Home Biotech News Is Cryosleep Biologically Possible? It’s A Fiction Or Can Be A Reality?
Facebook
Twitter
WhatsApp
Linkedin
Email 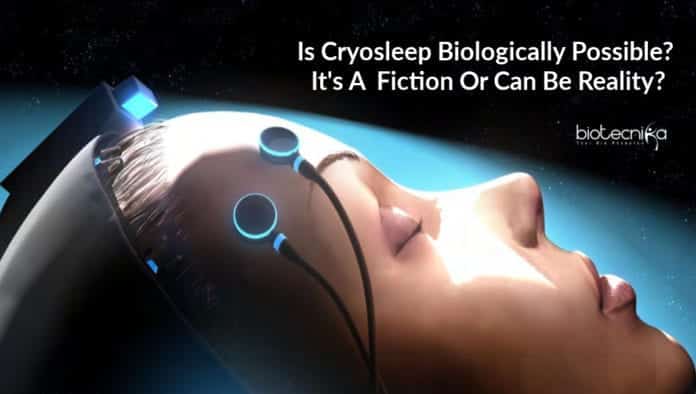 Cryosleep Biologically Possible? It Is A Fiction Or Can Be A Reality?

Tons of movies nowadays are based upon space exploration and the idea of relocating mankind to another planet – a better environment in the future. If this were to be done, a safe planet with a habitable environment would be required at first. Since man has the knowledge about major planets within our solar system, it is quite possible, that he might want to wander beyond. In order to do that, he would have to travel millions of light-years and yet needs to be alive to tell the tale.

Now imagine relocating an entire species or at most, the entire life-form present on Earth. By the time they would land on the destined planet, they would either become old, fragile or perish during the attempt. The answer to this, however, has been shown in countless movie animations and it is a state called – ‘cryosleep’.

Now let us understand whether its real phenomena to begin with? We do know the various processes to preserve life, but how to sustain it for years together, is the question?

Cryosleep is a process in which a person

is put into a state of suspended animation using a drug or a chamber or something very cold and it is a common sci-fi trope. It may be called a way to cheat death, where a person’s life form may be suspended in -200 degrees Celsius and probably preserved in liquid nitrogen. But will there be a chance to wake up from this hibernation?

On the silver screen, we have seen many actors wake up from slumber when their names are called or a button is pressed on their huge casket like machines. But how plausible is that in real life?

Would he be as alive as before?

Would he be able to move, walk, talk, think, as he was before?

It would probably feel like a hibernation period, only for years together. If we look at his life at a social level, it is quite possible that in his lone journey, his friends, relatives, and loved ones might not be accompanying him, hence they would have aged and perished on Earth as the clock ticks, while he would not have aged a single day! It would probably have a social impact on a person’s mental health. Nevertheless, preserving the body seems quite interesting in itself.

In order to survive, the vitals would have to be kept in order and would need to be monitored every second. We find huge machines and leads connected with the man’s hibernating life form, that can induce sleep, monitor as well as jolt him awake.

Past and Present scenario:

Preservation of life forms frozen in ice has been the aim of many scientists in the past decade. There are many instances of animal and human bodies found in the ice, frozen, yet preserved and not damaged by the extreme temperature. This makes the concept of a ‘cryosleep’ sound doable.

The first person to be cryopreserved was Dr. James Bedford in 1967. He died of kidney cancer, but his will was to be put into a cryo-chamber, in hopes that one day in the future, doctors will be able to bring him back.

Robert Ettinger, a science fiction writer and physics instructor whose idea of freezing the dead for future reanimation repelled most scientists died in 2011 and went on to found the Cryonics Institute in Michigan where he, his mother and his first and second wives all now reside in metal flasks kept at −196 °C. Death sounds irreversible but can be argued.

With advancing science and technology, life expectancy has increased multiple folds and the day is not far where major illnesses will be cured in the blink of an eye. We have heard of many instances of near-death experience, where a person has been revived despite losing the vital signs of life for minutes together. What if this could be extended a little more with the support of technology? Although the concept has never become mainstream, around six companies were established in the 1970s to use the technology. But the majority could not cover the fixed costs of preserving the bodies, thus went bankrupt, and the number of people choosing to sign up is steadily increasing year on year.

There are now nearly 300 cryogenically frozen individuals in the US, another 50 in Russia, and a few thousand prospective candidates signed up. There are even more than 30 pets at Alcor’s chambers, the largest cryonics organization in the world in Arizona, that has been around since 1972.

There are many attempts to give shape to this dream. Space Works Enterprise works in collaboration with NASA to build a stasis chamber, to bring this concept into reality. When the mild hyperthermia is induced, we may call it suspended animation, but it is more like a long and deep sleep. The institute believes, if this holds true, we would be able to accomplish space travel easily, without the fear of losing the intelligence to do it. This will increase the sustainability and success rate of relocation to Mars in the near future.

If we dive into biology, our body is made of 50-75% water, which means our cells have a 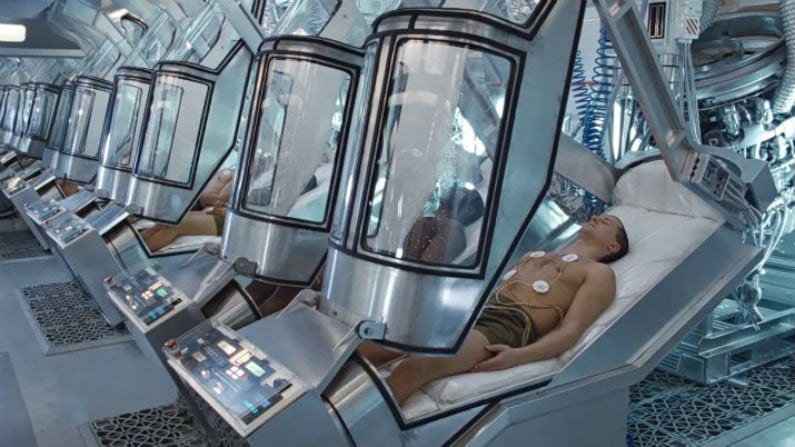 lot of water content. If we were to freeze this tissue, we will increase the chance of the water turning into ice crystals. Freezing water into this form allows it to expand and hence damage the cells. Just like vehicles in winter, our body would require antifreeze liquid, to be able to remain undamaged.

Scientists are trying to replace blood and body fluid with antifreeze liquids to help in this process. Now when the tissues will be frozen, instead of ice crystals forming, the solid tissue will clump up together as a single mass similar to glass, by a process now termed as vitrification. As the cells would be prevented from bursting, this could sustain the life form for a longer period of time. But can the heart, liver, brain survive this? Can it be stored, without the loss of critical functions? The answer to this may lie in robotics.

Storing and restoring ‘oneself’:

On a parallel timeline, people have started exploring the concept of computers and robots gaining emotions and the ability to think. We have successfully ‘downloaded’ the thought process of animals and insects into artificial machinery. Now, could the brain and being of an individual be ‘downloaded’ in the same way.

Could that information be preserved along with the life form, for a future ‘awakening’?

Cryotherapy – the basis of cryosleep:

Cold temperature, cold water, ice packs have been known to have medical benefits. Cryotherapy has been initiated in institutes, however, it is not FDA approved for the entire body. It is employed in treating tissue lesions and also employed as a part of surgical treatment – cryosurgery or cryoablation.

Many questions in this area, how to use it advisably, what could go wrong etc have been slowing down the research pace. However, plenty of research is ongoing in this context. Very soon the answers will change human history.

Cryosleep is not just science fiction anymore, it is taking shape of reality. It is an exciting field and concept but also has an ethical constraint to it. Though the technology has been theoretically conceptualized, the practical application and the chance of success is the major limitation in this area of research. If man overcomes this challenge, it will be a huge step in saving and preserving life and intelligence as we know it.

About the Author
Rashmi Sanyal is one of the

most experienced senior team members of Biotecnika. Coming from a research background in cancer, she specializes in Cancer Genetics, Immunology & Developmental Biology. Her experience in the Ph.D. Exam & Selection field is vast. She has a keen interest in understanding the latest developments in the Biotech & Pharma Industry and is very passionate about educating the same to her students.