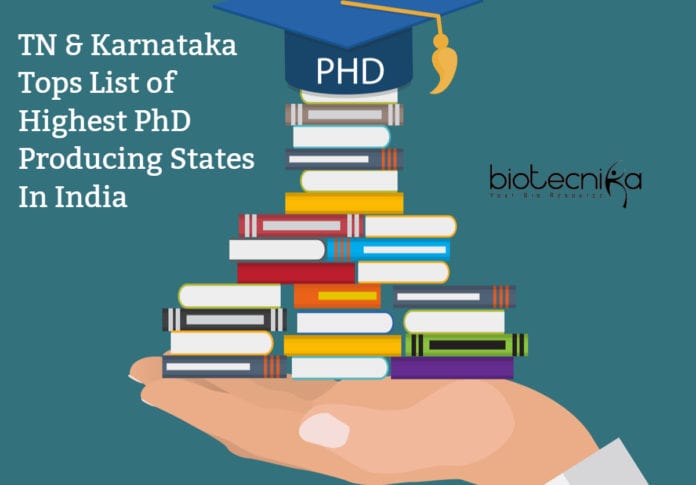 According to the All India Survey for Higher Education 2019 by the HRD ministry, Government of India, Karnataka produces the second largest number of PhDs in the country.

The high number of PhDs in Karnataka doesn’t come as a surprise. The state has the third-highest number of colleges, after Uttar Pradesh and Maharashtra.


The college density in Bangalore Urban is 53. College density is the number of colleges per lakh eligible population in the 18-23 age group. The National College Density average stands at 28.

Bangalore Urban district has the most colleges in the country- 880, followed by Jaipur with 566 colleges.

With research, a critical factor in improving their position in national and global rankings, universities have been pushing for research activities on campus. Some deemed universities have cut fee for international students to pursue Ph.D. and increased their stipend.

Prof S Sadagopan said IIIT-B director said that Karnataka has a culture of promoting science, arts, and culture. He attributed this to the Legendary Scientists such as C.V. Raman and also Mysore rulers for propagating the idea of research.

Despite a large number of colleges, the gross enrollment ratio in Karnataka remains at 29, marginally higher than the national average of 26.3.

The ratio records the number of eligible students in an age bracket enrolling for a course. Tamil Nadu has an enrollment ratio of 49. The Indian state of Kerala and Maharashtra have 37 and 32, respectively. Some of the states with better ratio are Sikkim (54), Delhi, and Puducherry (46 each), Himachal Pradesh (40) and Uttarakhand (39).