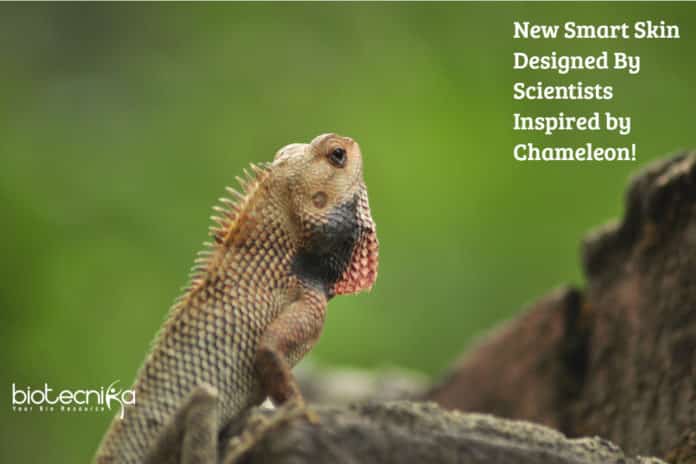 Scientists have developed a flexible smart skin that changes color when it reacts to heat and sunlight while maintaining a near-constant volume.

The first author of the research paper, Yixiao Dong, said that chameleons inspired the idea‘. He further said that his team developed a new concept for a color-changing smart skin, based on observations of how nature does it.

Besides chameleons, many other creatures have evolved the ability to change color.  For example, the stripes on a neon tetra fish turn from deep indigo to blue-green when they swim into the sunlight.

The study was published in the journal ‘ACS Nano.’

New Smart Skin- How Did The Scientists Make an Artificial Skin?

The coloration in these organisms is not based on pigments, but tiny particles in a repeating pattern, known as photonic crystals.

Expanding or contracting the hydrogel changes the spacing between the arrays, resulting in a color change.

However, the problem is the unstable structure of this material. The action needed to change color leads to structural instability and buckling of the material. It shows a significant shrinkage while showing a visible change in colors.

A senior author of the paper added that Khalid Salaita No one wants a camouflage cloak that shrinks to change color.

Dong hypothesized that the skin cells making up the dark matrix somehow adjusted to compensate for the shifts in the photonic crystals.

Witnessing this phenomenon Dong and team imagine if they could design something similar. The scientists used magnets to arrange patterns of photonic crystals containing iron oxide within a hydrogel. They then embedded these arrays into a non-color-changing hydrogel.

The second- springy hydrogel was mechanically matched to the first hydrogel to compensate for shifts in distances between the photonic crystals. When heated, this strain-accommodating smart skin (SASS) changes color but maintains a near-constant size.

When exposed to natural sunlight for 10 minutes, the SASS films shifted from orange to green, without changing in size.

Dong said that there is still a long way to go for real-life applications, but this development is exciting, and it will undoubtedly lead to more extensive research to develop artificial new smart skin