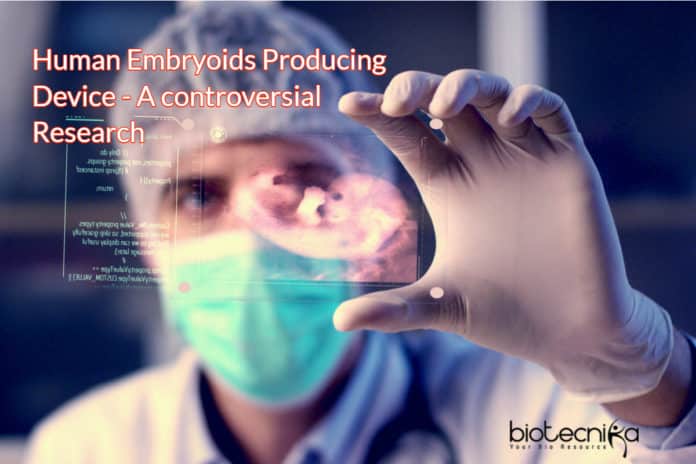 Other researchers have previously created synthetic embryos, which are also known as embryoids. These embryoids are made by coaxing human stem cells to form structures found in very early human embryos. The research study has raised questions about how similar to complete embryos they could and should be allowed to become.

The new work takes such a study further by creating a method that can rapidly generate relatively large numbers of human embryoids.

Jianping Fu who is an associate professor of biomedical engineering at the University of Michigan in Ann Arbor, who led the research, said that this new device allows us to achieve a superior efficiency to generate these early human embryo-like structures.

Fu calls this step as an exciting new milestone for this emerging field that should significantly improve the ability of researchers to study early human development.

And such human embryo-like structures have a lot of potentials to open what we call the so-called black box of human development, Fu added.

He was referring to the first few weeks after a sperm fertilizes an egg where the embryo is inside a female’s body and hard to study. A long-standing guideline bars researchers from conducting studies on embryos in their laboratories beyond 14 days of development for various ethical reasons.

Fu said that the ability to produce large numbers of embryoids, which are not subject to the 14-day guideline, will hopefully provide researchers with new insights into important health issues, including how to prevent birth defects and miscarriages. In addition, scientists could use the embryoids to screen medicines, to help determine whether these medications are safe for pregnant women to take. And such research can lead to a lot of good, Fu added.

Other scientists also agree with this statement.

Ali Brivanlou who is an embryologist at the Rockefeller University in New York said that this is a major advance in the knowledge of early human development, They are opening up windows to the hidden aspects of development or say that we have never seen before. And this knowledge is really the Holy Grail of human embryology.

Other scientists and bioethicists agree with this completely. But they also caution that Fu’s research would raise sensitive issues and will face various ethical issues.

Insoo Hyun who is a bioethicist at Case Western Reserve University and Harvard Medical School, said that the team needs to be very careful not to model all aspects of the developing human embryos so that they can avoid the concerns that this embryo model could one day become a baby if you deposit it in the womb of a woman.

Because of such concerns, Fu said that he purposefully made embryoids that are not complete models of full human embryos. Embryoids only resemble a portion of the human embryo i.e, the core of the early human embryo, Fu added. These embryoids are missing key structures, such as the early stages of the placenta and yolk sac which provide nourishment to human embryos.

Fu said that he understands that there may be people sensitive to this development when they see that it is possible to massively produce organized embryonic structures. People will be concerned. he added that he wants to make 100% clear that his team has no intention of trying to generate a synthetic structure which would look like a complete human embryo. Fu also added that they have zero intention to do that!

Daniel Sulmasy, a bioethicist at Georgetown University, said that the recent development would be sort of a very early sort of Frankenstein model, i.e, by taking different parts and stitching these together in order to try to create an entire organism.

If someone tried to do it and it was even at the earliest stages of human embryonic development, and they try to then let it develop further, that would be a problem, Sulmasy added.

The human embryoids producing device Fu created is a thin silicone square. The silicon plate contains four wells around a narrow channel. The researchers place stem cells i.e, either human embryonic stem cells or say induced pluripotent stem cells, that can be made from adult cells, into the device. Next, the scientists added chemicals to adjoining wells that can stimulate the cells to grow key structures of human embryos.

Each device can produce about  12 embryoids in just a few days, Fu said. This enables researchers to produce hundreds of structures by using many of the devices simultaneously.

The rapid advances in embryoid creation and development of the device that mass produces human embryoids have prompted the International Society for Stem Cell Research to launch a review of its guidelines.

And if these embryo models end up being complete or are built to have all the same components of a natural embryo, they should be subject to the same 14-day rule that limits research with natural human embryos, Hyun said. That is one more reason to avoid modeling the whole thing at once, he added.