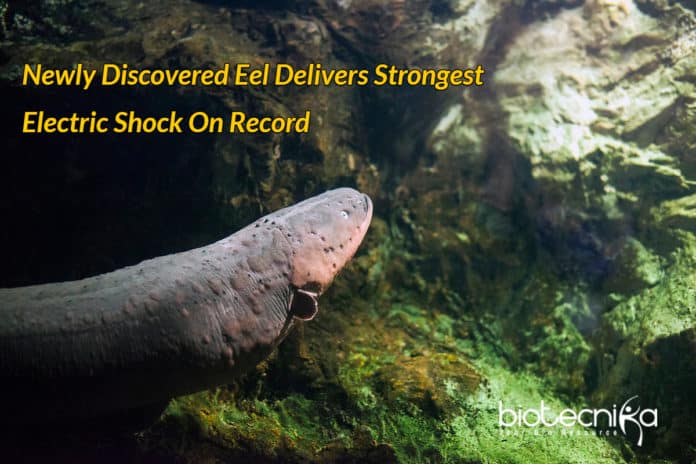 In the murky freshwater rivers, that snake across the Amazon lurks an eight-foot fascination: the electric eel with strongest shock yet! Since the discovery of electric eel, more than 250 years ago by Swedish naturalist Carl Linnaeus, researchers have thought the electric eel was a one-of-a-kind phenomenon, with only one species, Electrophorus electricus.

Now researchers say their team has discovered 2 new species of the electrifying fish, where one of it can generate an electric discharge far stronger than the early discovered E. electricus.

David de Santana, the zoologist at Smithsonian Institute, said in a press release said that these electric fishes grow to be seven to eight feet long. They’re really conspicuous. he added that if we could discover a new eight-foot-long fish after 250 years of scientific exploration, can we imagine what remains to be discovered in that region?!

De Santana and his colleagues first collected more than 100 electric fishes from the rivers and lowland floodplains that ripple vein-like across northern South America. Then the scientists conducted a series of examinations on the specimens collected. Researchers scrutinized the fishes’ DNA and made an exhaustive analysis of the eels’ shapes, sizes, and electrical capacities.

The research team’s extensive analysis on the specimens tripled the number of known electric eel species till now. Although the newly identified electric fish look remarkably similar to that of E. electricus – gray, flattened, wrinkly giant worms that wiggle through the water – the new species of electric fish, Electrophorus voltai and Electrophorus varii, are very unique. Electrophorus voltai, in particular, sets itself apart with a record-high shock.

This electric eel spits out electrical discharges at 860 volts, according to the Santana’s and his team’s report on Tuesday in the journal Nature Communications. This property is what makes the animal the strongest living bioelectricity generator known, and far stronger than its cousins already discovered. Electrophorus electricus produces a comparably paltry 480 volts while Electrophorus varii, the other freshly discovered species, can generate up to 572 volts. Not as impressive as Electrophorus voltai, but still four times as much as your standard U.S. household outlet.

Beyond their cool factor, electric eels have sparked several medical and technological advances. The animals inspired the design of the first electrical battery and continue to offer a model for battery design today.

But this may only be the tip of the iceberg. De Santana says Electrophorus voltai’s exceptional electrical capacity offers a well of unexplored potential. It could really have different enzymes, different compounds that could be used in medicine or could inspire new technology, said de Santana.