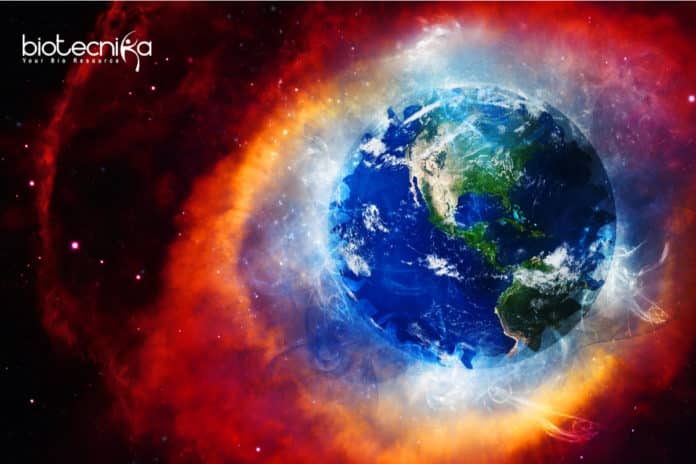 Scientists from the GLOBE Institute at the Faculty of Health and Medical Sciences, University of Copenhagen, have now found that the animals themselves contributed to an adjustment of the oxygen level and thus indirectly controlled their development.

Tais Wittchen Dahl, Associate Professor from the GLOBE Institute, said that this is the first time scientists have been able to measure Earth’s Heartbeat- the dynamics between the oxygen level and the productivity on Earth.

The researches found that it is not just the environment and the oxygen level that affect the animals, but the reverse was also possible.

To gauge what controls the oxygen level on Earth, the scientists have studied the limestone deposited on the ocean floor during the Cambrian explosion 540-520 million years ago. The ratio of uranium-238 to uranium-235 in the old lime has revealed the oxygen level in that period. The scientists have thus been able to see some massive fluctuations between two extreme conditions. This was where the ocean floor was covered by oxygenated or oxygen-depleted bodies of water. It is these global-scale fluctuations that they believe the animals themselves have contributed to.

Tais Wittchen Dahl explains that Less phosphate produced fewer algae. This over geological time led to less oxygen on Earth. Due to the inadequate oxygen conditions, the larger animals moved away. Once the animals were gone, the oxygen level went up again. This created a favorable living condition. This process repeated itself to sustain life on earth.

The researchers believe that a better understanding of the dynamics between oxygen and life- Earth’s Oxygen Control by Animals- will also bring us closer to an understanding of possible life on other planets.

According to Tais Wittchen Dahl Oxygen is a Biomarker. Its presence confirms life on earth. In the same way, if life in itself helps control the oxygen level, it is much more likely that there will also be the presence of life where there is the presence of oxygen.

Scientists believe that this concept- Earth’s Oxygen Control by Animals- may help researchers find life on other planets!