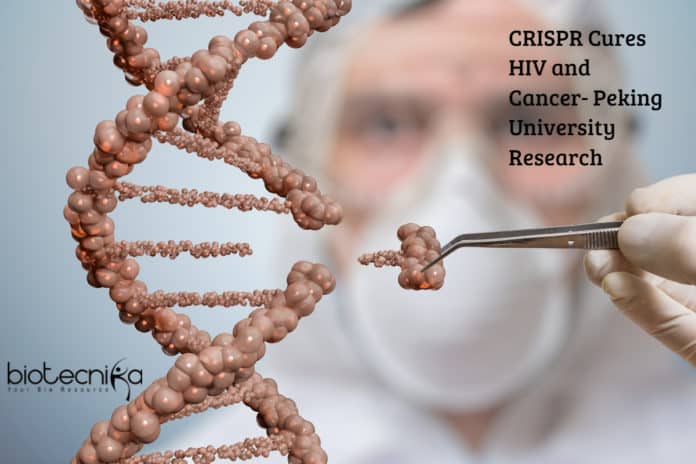 Chinese scientists have safely treated a man with leukemia- Blood Cancer and HIV using CRISPR-edited stem cells. Researchers say that the results give the CRISPR field a ‘green light’ for future research efforts.

The man’s medical case was published in the New England Journal of Medicine. This is the first detailed report in a major academic journal of how doctors are using the CRISPR technology to manipulate the DNA of a living patient to cure diseases. Though the CRISPR technology has its advantages though there has been a heavy note of caution about this gene-editing technique due to ethical issues.

The patient was suffering from dual diseases- HIV and cancer. The researchers at the Peaking University Stem Cell Research Center in Beijing administered CRISPR therapy for the same. The man needed a transplant of stem cells to replace the damaged stem cells that were causing his blood cancer. That procedure also allowed scientists to re-engineer a gene called CCR5 in the donor cells to be resistant to HIV.

CRISPR Cures HIV and Cancer- What were some controversies regarding the CRISPR technique?

A scientist He Jiankui altered the DNA in two embryos to make the babies resistant to HIV. This effort by the scientist sparked an international controversy regarding the ethical and moral issues of the CRISPR technique. Top international organizations called on to ban the CRISPR technique. The latest effort by the scientists at Peaking University is a far more incremental but legitimate effort.

The work by Peking University’s Hongkui Deng and team had several key differences from the earlier effort. This includes the controlled use of gene-editing on only select cells, the patient’s consent, and the subsequent publication of the findings.

CRISPR Cures HIV and Cancer- Result of the Experiment

The experiment had mixed results, including both positive and negative.

Nineteen months after the treatment, the young man’s cancer- acute lymphoblastic leukemia, is in remission. The attempt to cure his HIV was a failure. Only about 5% of his infection-fighting lymphocytes are now resistant to HIV, making continued treatment of the virus necessary.

Deng said that even though the results showed some negative response, it shows a vital proof of the concept that Crispr-edited cells can be transplanted into a person and persist long-term.

Laurie Zoloth, a professor of religion and ethics at the University of Chicago, added that we should all hope that this is a significant and influential advance in scientific research. Zoloth highlighted that this experiment was performed safely and ethically. This experiment has the power to transform medicine.

CRISPR Cures HIV and Cancer- Was there any Safety issues?

The researchers didn’t detect any adverse effects on the patients from the gene-editing or signs that the man’s DNA had been damaged. Hongkui Deng said that more extensive studies where more altered cells persist are needed to co-relate the findings. Concerns over unknown potential effects of Crispr has been one of the major hurdles standing in the way of more trials moving forward.

Data on three patients treated with Crispr-manipulated cells at the University of Pennsylvania, perhaps the first in the U.S., will be presented at the American Society of Hematology meeting in December.

Crispr has been compared to a word-processing system that allows writers to cut out extraneous words and correct typos quickly. With DNA, it acts as molecular scissors. It precisely trims specific flaws in genes. Scientists are still trying to determine if modifying the genome can create stray errors elsewhere or lead to unexpected harms.

Deng said that Researchers are now planning to increase the number of cells that are transformed and can thrive inside of a patient for a more extended time.

Researchers in the field of CRISPR agreed that the safety findings are a critical first step. They are hoping further refinement of the process of gene editing using CRISPR will lead to better results.

Jennifer Doudna, professor of biochemistry and molecular biology at the University of California, Berkeley said that one key issue is that cells that have been altered using CRISPR gene-editing or other types of technology are “finicky and tricky” to transplant. She is credited as an inventor of the CRISPR technique.

She added that the latest study confirms that CRISPR Therapy appears safe, but the next step is showing that there is some efficacy, a therapeutic benefit to doing this.

The first trials dor the CRISPR Technique started in 2016 in China, when Lu You, a physician at Sichuan University, had put CRISPR-edited cells into a lung cancer patient. Since then, scientists have launched multiple clinical trials and reportedly treated dozens of patients.

The main concern about the CRISPR technique is whether it benefits the patients? With time and more clinical trials, the world will surely have an answer to it!