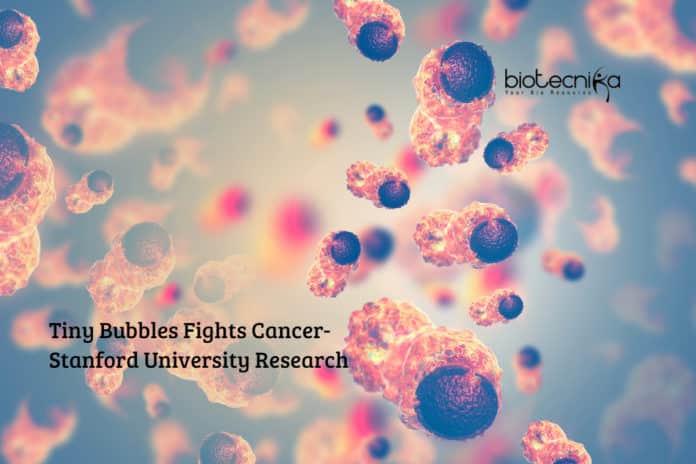 In a recent study, scientists have found that ‘healthy cells’ in our body release nano-sized bubbles that transfer genetic material such as DNA and RNA to other cells.

These bubbly extracellular vesicles could become mini treatment transporters. These bubbles can carry a combination of therapeutic drugs and genes that target cancer cells and destroy them. This research was carried out by Michigan State University and Stanford University.

Masamitsu Kanada, the lead author of the study, said that this approach improves the therapeutic approach to delivering enzyme-producing genes. These, in particular, can convert certain drugs into toxic agents and target tumors. Masamitsu is an assistant professor of pharmacology and toxicology in MSU’s Institute for Quantitative Health Science and Engineering.

The study was published in Molecular Cancer Therapeutics

Researchers call it ‘Prodrugs‘ which start as inactive compounds. Once these prodrugs metabolize in the body, they’re immediately activated and can get to work on fighting any disease including cancer. Aspirin is an example of a prodrug.

The study focused on breast cancer cells in mice. Scientists used extracellular vesicles, or EVs, to deliver the enzyme-producing genes. This could activate a prodrug combination therapy of ganciclovir and CB1954 in breast cancer cells. The technique used is called a Gene-Directed Enzyme, Prodrug Therapy. Two different gene vectors that act as additional delivery mechanisms for DNA were used, namely Minicircle DNA and Regular plasmid.

According to Kanada, the new approach could effectively become a better cancer treatment option when compared to conventional chemotherapy in the future.

Conventional chemotherapy is not able to differentiate between tumors and healthy tissue. This non-specificity can cause severe side effects, including insufficient drug concentration in tumors.

With Extracellular Vesicles, treatment can be targeted to specific tumor cells. This type of delivery could minimize the risk of unwanted immune responses that are generally seen with other gene therapies due to their compatibility with the human body.

A phase-one clinical trial is set to start soon in the U.S. and will use EVs and a type of therapeutic RNA molecule for the treatment of metastatic pancreatic cancer.

Kanada and his team of researchers will continue to further engineer and test Extracellular Vesicles, improving their effectiveness and safety, so using them as cancer-fighting gene therapy in humans becomes a reality.