Home Career Advice How Much Of Physics Knowledge Is Required For Career In Biological Sciences? 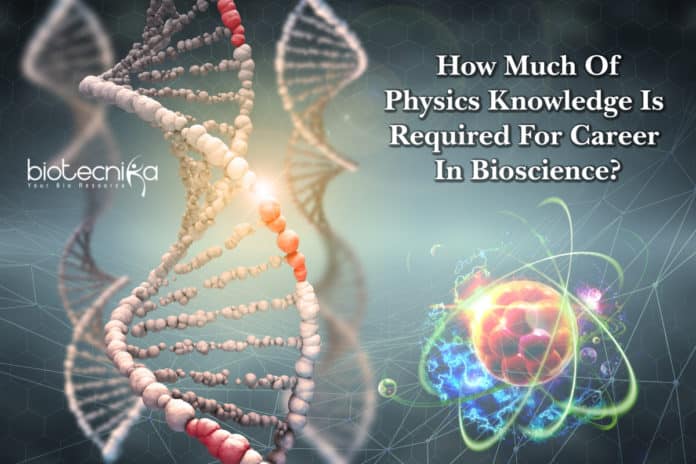 Physics Knowledge in Biology – Physics Skills For Career in Bioscience

Have you ever come across this famous joke, where –  A biologist, a physicist, and chemist were visiting the ocean for the first time? The physicist was fascinated by the waves of the ocean and thus he wished to do some research on the fluid dynamics of the waves. He walked into the ocean and quite clearly as you guys predicted he was drowned and never returned. Next biologist wished to do interesting research on the flora and fauna inside the ocean and walked inside sadly got drowned. Then came the chemist. He waited thinking and observing for a long time and afterward wrote the observation, “The biologist and the chemist were soluble in ocean water”. Hilarious right !!

Biology, chemistry, and physics are brothers from the same mother i.e. science. In any of these subjects, there are always interrelated topics in which one needs to have knowledge about other streams as well even if he/she is doing specialization in either biology, chemistry or physics. Let’s explore how biology and physics melt together in order to give rise to a beautiful area of research.

Physics has always helped biologist to explain and research about a huge myriad of biological events like for example, physics helps in explaining how bats use sound waves to navigate in the dark and how insects wings have the ability to move through the air. Another interesting finding by the American Physical Society exhibits how different flowers arrange their petals and seeds in a Fibonacci like sequence to maximize the exposure of nutrients and light. In other cases, biology as well helps to prove physical theories and laws. Feynman also stated that biology helped scientist to come up with the law of conservation of energy.

While this biology and physics as a couple are odd, there are instances where physics cannot explain and sometimes even disproves some biological phenomenon that occurs. One example is a study by Cornell University that explains the biological theory of evolution which contradicts the second law of thermodynamics as nature can’t create order from disorder and against this idea evolution is such a process that creates an increasing level of order.

One such field wherein biology and physics are beautifully entangled is biophysics. Mechanisms like how our system which is complex like the immune system, circulation, brain, and others work, how molecules that makeup life works and are made of, how different parts of tissues and cells work and function. It’s a vibrant scientific field where scientists from different field use their skills to understand how biology and life as a whole work.

In one of the first collaborations between physics and biology, it is very interesting to understand how physics has helped biology to reveal one of the most complex and crucial phenomena. In an interesting instance, physicist dive in the biological area by providing a service typically related to imaging. Medical imaging such as MRI, CAT scans and ultrasound are familiar in hospital settings and are extensively used in treatment, diagnostics and developing medical theories wherein much of such work is attributed to physicists and engineers.

A microscope is not less than a divine eye which is almost responsible for defining life at its minute level. A lot is owed to physicist’s understanding of the noise, image analysis algorithms, lenses coupled with the power of lasers. Hence some basic knowledge in physics will help anyone to master in microscopy which eventually will help in understanding biology better under the lens.

Talking about the applications of physics in the evolutionary biology field, let’s understand a theory given by physicist Jeremy England of the Massachusetts Institutes of Technology. He argues that adaptation as such doesn’t need to rely on Darwinian ideas of natural selection or genetic inheritance, but they might very beautifully integrate into the thermodynamics of complex systems. The very idea of adaptation and fitness is very hard to pin down often ending sounding circular. England explains this idea in the most basic form as the ability of a system to persist in the state of constant throughput of energy by oppressing big fluctuations and dissipating that energy.

In simple language just keep calm and carry on.

All is all biophysics include a huge variety of different fields such as:

Computer modeling is very commonly used to understand and manipulate the structures and shapes of proteins, complex molecules, and viruses. Also, crucial information extracted from computer models is used for developing new drug targets to understand how proteins mutate and cause tumors to grow. Also, simulations and computer models are used to make predictions in other biological fields like evolutionary biology, ecology, cell biology, molecular biology, etc.

b. Data Analysis and Structure

Using Biophysics, the structure of DNA was solved in 1953 and this discovery was critical in showing how DNA is the blueprint of life. The vast amount of data which is generated from sequences of DNA from a huge number of humans and other living organisms can be read and analyzed efficiently with the help of biophysical techniques.

With the help of computer models, biophysicist is learning how to build neural networks in order to understand how the nervous system and brain works hence leading to novel understanding of how visual and auditory information is processed.

Knowing the cell’s internal system can help in exploring a lot of aspects of life and diseases. Biophysicists usually use fluorescent tags which helps them to understand life under the microscope. They also study how hormones move in and around the cell and how they help in communication.

Biophysics also helps in understanding how one can make use of biomechanics in order to design better prosthetic limbs, better nanomaterials for drug delivery.

Many life-saving treatments and devices used for the same are being developed with the help of biophysics knowledge. Treatments like artificial heart valves, pacemakers, radiation therapy, cardiac defibrillators, kidney dialysis etc are extensively been used in medical science in today’s time.

From the stratosphere to deep ocean vents, environmental biophysics measures and models all the environmental aspects. They do their research about microbial communities that is present at every niche on this planet, they are involved in tracking pollutants across the atmosphere and also in finding methods to turn algae into biofuels.

Hence biology and physics are truly incomplete without each other. Physics Knowledge in Biology field is very much required. Whether it is to develop a computer model in order to expose a new flu strain eludes the immune system or construct 3D models of new protein structures to better understand how they work, physics has given additional knowledge to understand life more precisely. Thus we cannot skip physics if one wants to be an efficient biological scientist.

About the Author
Kajol Patel is known as the Czar of Ecology & Evolution at Biotecnika.

she is one of the most active Research enthusiast working with us. Her active interest in various upcoming research in the field of Life Sciences is evident from her articles & Podcasts. This article – Physics Knowledge in Biology – Physics Skills For Career in Bioscience, is focused on the importance of knowledge of physics theory is required for a successful career in biological research.