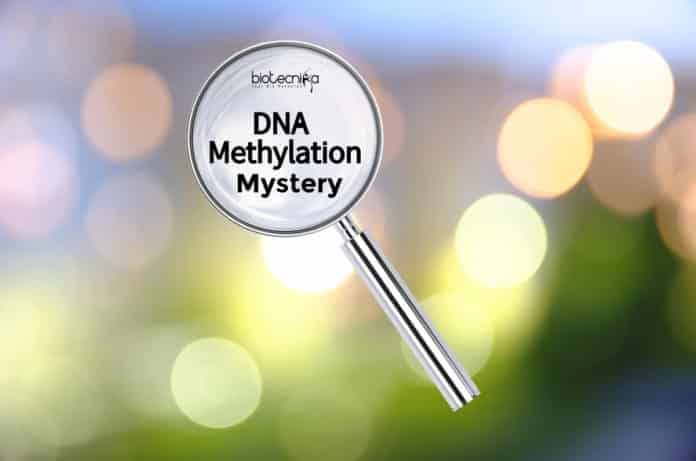 All species in the world mark their DNA with methyl groups. This is done to control and regulate the gene expression as well as to differentiate native DNA from foreign DNA, or to mark old DNA strands throughout duplication. Methylation is accomplished by specific enzymes called methyltransferases. These enzymes decorate DNA with methyl groups in certain patterns to create an epigenetic layer on top of DNA.

Until now, researchers have not been struggling to tell which enzymes in the organism’s body are responsible for which patterns. But in a recent study, published in journal  Nature Communications, scientists from The Novo Nordisk Foundation Center for Biosustainability (DTU Biosustain) at Technical University of Denmark have successfully coupled enzymes with specific methylation patterns in two bacteria.

Torbjørn Ølshøj Jensen from DTU Biosustain, Specialist and first-author of the paper on a method uncovering the mystery of DNA Methylation, said that by knowing which enzyme does what opens up to a lot of applications. With this knowledge of the function of

enzymes, one can construct model organisms with artificial methylomes which are by mimicking the methylation pattern of the strain one wants to introduce DNA to. In this way one can ensure the survival of introduced DNA, he added.

Researchers often run into problems with methylation and give to much of attention to the methylation of DNA particularly when they try to introduce a foreign DNA to a host organism, for instance, bacteria or yeast. Introduction of foreign DNA to a host is essential when building the production hosts that are often called cell factories. This makes them capable of producing, for instance, medicine, sustainable bio-chemicals, and food ingredients. Often, to achieve this,  the host needs genes (DNA) from other organisms i.e, foreign DNA in order to produce the sought-for compounds.

But in most of these cases, the host will reject the foreign DNA. The host chops the foreign DNA into pieces. This rejection of foreign DNA is initiated by the host,  happens because the methylation patterns in the Foreign DNA reveal that the DNA is alien or it isn’t a part of the Host system. Researchers working with E. coli for their experiments, usually don’t have that many problems. This is because when introducing new DNA as E. coli is well-known as well as well-behaved it doesn’t create many problems and complications. But moving into lesser-known hosts can become a great problem.

Torbjørn Ølshøj Jensen led this study uncovering the mystery of DNA Methylation also added that working in other bacteria than E. coli, scientists often have to do a lot of trial and error when it comes to DNA transformation. But these trial and error methods are just not good enough. They need to have more knowledge as well as tools. With these tools and knowledge, they will have a systematic and rational way of fixing the problems associated with DNA Transformation.

This was done for almost all methyltransferases enzymes. After this coupling, all the plasmids (in a pool) were read using a sequencing method. This sequencing method is designed to reveal methyl groups. This gave the scientists a library of enzyme-to-motif couplings.

This quick method of identifying methyltransferase enzyme methylation patterns on DNA holds great promise to other researchers struggling with DNA degradation as well as uncovers the mystery of DNA Methylation, according to the research team led the study.

To validate the method which reveals the mystery of DNA methylation, the researchers analyzed the genomes of the temperature-resistant bacterium M. thermoacetica as well as the bacterium A. woodii. Both of these bacterias are hosts with great potential for industrial applications and substantially modified genomes.

The scientist team of this study assessed all of the 23 methyltransferases from these bacterial organisms, looking for those being active on their genomes. For 11 motifs out of the 12 motifs, scientists were able to couple activity to specific methyltransferases gene.

Using this method that is capable of revealing mysteries of DNA Methylation, the scientist team hopes to design hosts with an unambiguous “methylome” — meaning that the organism only harbors wanted methyltransferases, which will ease the introduction of foreign DNA even into non-model organisms.