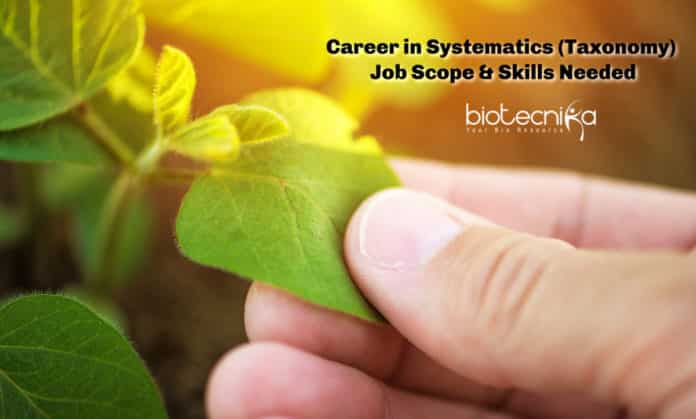 Biodiversity is the key feature of life on earth and the study of this biodiversity comes under Systematics (Taxonomy), which mainly focuses on the diversification of lineages all along the time. It deals with new species discovery which is the basic units of biodiversity, restructuring the interaction/relationship patterns among the species at successively higher levels, classification of species according to the identified pattern and naming (taxonomy), and principally applies this knowledge to monitor and analyze changes in the organism through time. Systematics also includes specimen collection – plants, insects, photographs, etc. – their maintenance and record-keeping. These type of biodiversity collections are also known as a museum.

Long-time back people had the basic idea about the differences among the existing organisms and in fact many extinct organisms from the fossils. But it was in the middle of the 20th century when biologists understood the concept of change in character throughout time which leads to the development of an advanced form of an organism- in simple words they understood the evolution. This formed the basis of classification by identifying the phylogenetic relationship which is a cladistic approach. The approach requires identifying the advanced character or synapomorphy and using it to generate phylogenetic relationship among organisms and further classify the organisms. Recent years many refinements have been made in the methodology from character analysis, hypothesis construction, testing of hypothesis to further application.

Roles of Systematics in Modern Biology

A significant job of systematics is the search of new species and mapping of biodiversity. This involves extensive fieldwork where samples known as specimens are collected, preserved, documented and analyzed. Comparison with other specimens helps to determine the similarities and differences. After identification of the species, naming is done according to the rules of nomenclature for that group. A phylogenetic relationship is also determined which helps in the classification of the new organism. Such biodiversity collections document regional flora and fauna and thus provide information about worldwide biodiversity, its changes over time due to many biotic and abiotic factors.

Systematics (Taxonomy) helps to understand the similarities and dissimilarities between organisms existing or extinct. These comparative studies provide information about the changes in character with which an evolutionary history of life could be constructed. This possible via the construction of a phylogenetic tree which gives an indication of the relationships between taxa and the character transformation. Evolution has been found to be essentially closely associated with systematics.

The phylogenetic database provides information regarding the ancestry and shared characters among the species. This could be useful in predicting additional taxa which might possess a similar trait of interest. Any important resource which might be costly could be replaced by a less costly source with the help of database search in the related taxa. As such it doesn’t guarantee success, but the search window could be minimized by looking into the related species.

Understanding the relationship between species, organisms, taxa, etc. and their evolution is important for conservation. For a Career in Systematics/Taxonomy – Biodiversity knowledge plays a key role. With the passage of time and changes in abiotic factors, the biodiversity of the earth and of a specific region is changing. In order to maintain the species on earth and increase the diversity, systematics would help to identify the major taxa or species which needs to be conserved as it might be serving an important role. Conserving these species or groups would help in the survival of many other related organisms and thus maintain the diversity and eventually help to maximize it with time. Altogether it could serve in the sustainable development of human beings.

5. Predicting the geographical history of the earth:

Throughout the history of the earth, the continents had constantly shifted their position and even changed their shapes. This was identified by the study of life on earth through different time intervals. Mainly study of fossils helped to develop the geological time scale, which provides information about the emergence, distribution, and extinction of species along with the arrangement of landmasses. Like the widespread distribution of dinosaur fossils indicate that during that era the entire continents were fused together as a single landmass. Many such geological events could be identified through systematics alone.

People interested in a career in systematics/Taxonomy as student or professional need certain skill sets, out of which some have been mentioned below:

1. To pursue studies and career in this subject it is very important for a person to be ready to go filed work for collecting specimens or data, so one must be both mentally ready and physically fit to undertake outdoor activities. People normally inclined to nature or nature lovers enjoy working in this field.

2. One interested also needs to have good observation power along with an analytical bent of mind. Moreover, it is essential to have a good memory. All these are important for sample identification and collection, classification, documentation and drawing conclusions.

3. This subject also requires extensive lab work, one needs to be prepared for a variety of jobs related to specimen preparation, storage, and classification. Even the latest advanced molecular biology techniques like gene isolation, PCR, sequencing, etc. are also becoming important for systematics. Hence expertise in such techniques is also preferred.

4. Extensive documentation is required, so one needs to have good writing skills and expertise in computer-based documentation, database preparation, etc.

5. Having interpersonal skills in a field is important which will help in better communication and collaboration with people during fieldwork, lab work, etc.

6. To gain expertise in this field, one should be exposed to the first-hand experience with different organisms both outdoor and indoor in biodiversity collection. Such exposures will help in familiarizing one interested in the natural organisms and their variations so that identification of new species becomes easy. One truly dedicated to biodiversity collection needs to be ever ready with the required equipment when going outdoors, like one must carry measuring scale/tape, good camera, and GPS enabled devices.

7. Expertise in bioinformatics is required for those interested in database preparation, classification, phylogenetic tree preparation and other types of data analysis.

The current trend in systematics studies and mainly research in taxonomy is becoming more in interdisciplinary with the integration of diverse methods and approaches. For a Career in Systematics/Taxonomy research, one must have an idea about the research opportunities available. Classical methods of study like specimen collection, morphological techniques of identification and classification are important but, new tools and techniques are being used as well. Some of such latest techniques regarded to be essential for systematics include molecular biology techniques, computer-based database preparation and its analysis by bioinformatics tools, and new imaging techniques for identification of species. Integration of all these has led to the advancement in systematics and made the information accessible freely anywhere through online databases which could be even analyzed using automated systems. This promising feature calls in immense scope for knowledge base sharing and international collaborations.

Some of the major research opportunities available in this field are provided below:

1. Identification and Documentation of all species in a geographical region

With the advent of new technologies and their use in systematics, it is now possible to identify and document many species regionally and further correlate it globally. Digitization is the key behind the ease of documentation and analysis at a larger scale. It will provide a wider view of the distribution of species throughout and help in better understanding of the changes. Research specifically based on the changes could be undertaken which can monitor the effect of climatic factors, natural forces, and anthropogenic activities. It could be used for developing a model to understand how the natural system works and do predictions for the future. Such predictions could be further utilized for conservation purposes.

So just with the development of digital databases which could be one research topic, so many other research opportunities could be availed like studying the species dynamics, model development and simulation, prediction and conservation which could be done just at a specific regional level and further correlate globally.

2. Upgradation and revision of biodiversity collections

Biodiversity collections give us the intricate view of the past and present life forms, which is far from being complete. Yet there are numerous species to be identified, so collaborative research in this area to enrich the existing collections all over the world is a plausible research topic.

Evolution has been an enigmatic research area and even though many studies have been done so far, yet many facets are unclear. For example, the human evolution, still new fossils are being discovered and with every new discovery, some modification in the evolution theory is getting added. So, with the discovery of new fossils or new species the hypothesis of evolution changes. This is a very promising field of research.

Understanding the interrelationship among the species, their origin and possible course of changes as well as prediction of any associated undiscovered species is also a possible field of research with tremendous scope. With the usage of modern molecular techniques and bioinformatics, it is now possible to conduct multilayered complex analysis based on species comparison and ancestry.

Taxonomical research in medicine can be directly associated with disease diagnosis and treatment. It can provide a full understanding of the disease-causing microbes and the non-disease causing microbes. Based on such information efficient diagnostic methods could be developed for detecting the pathogens specifically.

Further getting the full knowledge of the microbiome of plants, sheds light on the association and their effect on the working of plants. These might help in the growth, development by providing nutrition, helping in better absorption or even protecting against pathogens, and even some could be pathogenic causing an adverse effect. So, a complete understanding of these microbial species can aid in the betterment of agriculture.
Same is applicable for animals like humans where microbes are found to be associated with skin, mucosal membranes, intestinal tract, etc. They have a significant influence on human health, diet, and disease.

A Career in Systematics/Taxonomy can be exceptional & very interesting. Systematics is a classical subject and has application in various works of life. Its importance is for the present and future of the existence and sustenance of life. Hence, there are immense opportunities available for research which requires dedication and set of skills to be pursued successfully.

About the Author
Dr. Sunita Adak, a pro-active faculty member of Biotecnika. She has specialized in Microbial Biotechnology

from IIT Kharagpur and is experienced in subjects like Cell Biology and Immunology. She encourages each one to reach their full potential and has been an influential role model. In this article she has talked about – Career in Systematics/Taxonomy – Job Scope/Skills Needed.