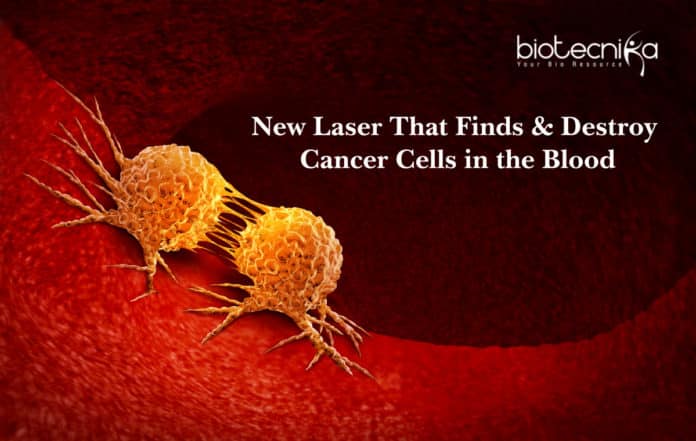 Malignant Cancer cells via blood may spread to other areas of the body easily. Researchers have developed a new type of laser which could find and zap those tumor cells from the exterior of the skin.

Though it may still be a ways away from turning into a commercial diagnostic instrument, the laser is up to 1,000 times more sensitive than current approaches used to detect tumor cells from the blood, the researchers reported in June 12 edition of journal Science Translational Medicine.

To check for cancer spread, physicians typically take blood samples, however frequently the tests fail to detect tumor cells if they are found in a single sample, particularly if the individual has an early type of cancer,” said senior author Vladimir Zharov, director of the nanomedicine center at the University of Arkansas for Medical Sciences.

If the tests do come back positive, that normally means there is a high concentration of circulating tumor cells from the blood; That signifies cancer has probably spread broadly to other organs also it is often “too late to effectively treat patients,” Zharov added.

Years past, Zharov and his group created the concept of an alternative, noninvasive procedure to test larger amounts of blood with sensitivity. Taking the path, they analyzed it on animals, then in the laboratory and brought it to clinical trials in people.

See Also
Coronavirus Vaccine Could be Available In 18 Months - WHO

The new technology known as Cytophone – uses pulses of laser light on the exterior of the skin to heat up cells in the blood. Since these cells carry a pigment called melanin, which absorbs the light — However, the laser simply heats up melanoma cells — perhaps not healthy cells. The Cytophone utilizes the tiny waves to be detected by an ultrasound technique.

This Technology was tested an analyzed on 28 patients who had melanoma & on 19 other healthy volunteers who didn’t have melanoma. They shone the laser onto the patients’ hands and found that over 10 seconds to 60 minutes, the technologies could identify circulating tumor cells in 27 out.

The device didn’t yield any false positives and it did not cause side effects or safety concerns, they stated. Melanin is a pigment that is normally present in skin, but skin tissues aren’t harmed, Sharon said. This laser therapy doesn’t damage those cells even though the skin produces melanin of course. That is because the laser light exposes a relatively a large place on the skin, while the laser energy is more concentrated on the blood vessels and also circulating tumor cells, he added.

Unexpectedly, the team discovered that following the treatment, the cancer patients had fewer. “We used comparatively low power” with the primary purpose of diagnosing rather than treating cancer, Sharon said. Yet, even in that very low energy, the laser beam seemed able to ruin the cancer cells.

Here’s how it works: Since the saliva absorbs the heat, the water around the melanin inside the cells starts to evaporate, producing a bubble that collapses and expands destroying the mobile, Zharov said.

The team hopes to conduct additional research to optimize the device further to kill tumor cells, while still being harmless to other tissues. The human trial is pending. Even so, only a very small fraction of African Americans get melanoma.

The team hopes to expand the technology to find circulating tumor cells discharged by cancers aside from melanoma. These cancer cells don’t carry melanin, so to detect them, the researchers would have to inject the sufferers using molecules or specific markers that could bind to these cells so that they can be targeted at the laser. They have so far demonstrated that this technique may work on breast cancer cells in the lab.

This news has been adapted from the original piece published at Live Science. 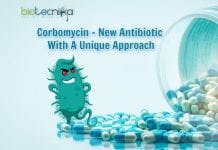 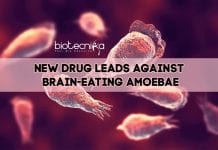