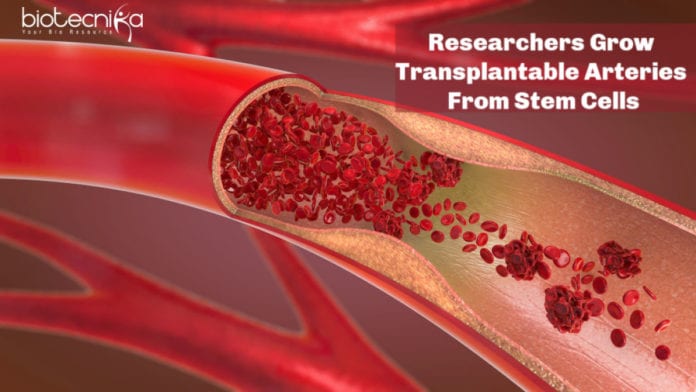 Since the early 1900s blood banks are vital in Medical care, now a group of scientists at the Morgridge Institute for Research in Madison -Wisconsin have come up with an idea, where they are using stem cells to construct arteries for patients with cardiovascular diseases. And along the way, they identified a drug that might help reduce complications in patients.

As per the study published in the journal Stem Cell Reports, the research team was led by James Thomson a Regenerative biologist that used pluripotent stem cells to grow smooth muscle cells, one of the two cellular building blocks of functional arteries.

They stated that with help from a small-molecule drug named RepSox the researchers perfected the construction process. This compound may also lower the risk of a potentially dangerous complication that is commonly seen in patients who have surgeries such as balloon angioplasty and bypass surgery for their arterial disease.

Previously Thomson laboratory at Morgridge used single-cell RNA sequencing and CRISPR-Cas9 to identify pathways that regulate differentiation of endothelial cells–a pillar of arteries and After manipulating the pathways, they generated functional arterial cells. This time, they focused on muscle cells.

Author, Jue Zhang clarified in a statement that- Widely used growth factors for generating smooth muscle cells from stem cells may also cause an abnormal thickening called intimal hyperplasia. He also stated that- Intimal hyperplasia can cause narrowing of the blood vessels, a phenomenon called restenosis and it’s also a common problem in smooth muscle cell differentiation, and if you want to make a useful artery, you don’t need that risk.

To restore the contractile ability of muscle cells and thereby facilitate blood circulation, the scientists used high-throughput screening to identify small molecules that could overcome the problem. In contrast to growth factors that were commonly used, RepSox inhibited intimal hyperplasia and it’s less expensive and more secure, the researchers reported.

Scientists are examining different regenerative methods for the Damages to the cardiac system are difficult to repair. Recently A team at Stanford University found that a protein called CXCL12 could help grow collateral arteries when the heart’s major arteries are blocked. The Hippo Signaling Pathway – Known to control the size of organs and cell death, was initially found to be responsible for restricting damaged heart muscle to perform self-repair functions.

There is still a work to be accomplished, while the current study brings the Morgridge team nearer to the objective of building arteries. Zhang concluded that Basically this cell type is better than previous efforts, but it’s still not mature yet they need to induce these cells to become more mature, to be similar to our native artery, to make it more functional.