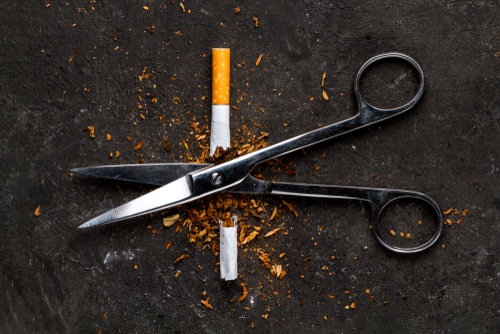 Tobacco smoking remains a major challenge for society till date causing the death of over 7 billion people per year, either by direct consumption or on exposure to second-hand smoke. And despite the availability of nicotine replacement therapies like the patch, gums, and medications designed to alleviate withdrawal symptoms post tobacco quitting but a lot of people don’t quit to do so.

“It is difficult to stop since smoking withdrawal is severe,” acknowledges Marisa Kallupi, Ph.D., a researcher in the Olivier George laboratory at the Scripps Research Institute. More then 80% people relapse within 6-12 months of withdrawal.

In their paper, Dr. Kallupi and colleagues describe the use of a novel enzyme, NicA2-J1, which degrades nicotine in the bloodstream of nicotine-dependent rats. NicA2-J1 is a novel enzyme produced from a bacterium Pseudomonas putida dwelling on tobacco plants. The idea behind the experiment was to analyze if the enzymes were able to degrade enough amount of nicotine while in the bloodstream of the tested rats before it reaches the brain, enabling enough nicotine to remain in the blood so that the animals would not experience withdrawal symptoms. Similar experiments were conducted with the use of vaccine but the amount of nicotine that reached the brain was way too high causing life threat due to under control of the withdrawal symptoms.

In earlier studies, NicA2-J1 had been shown to prevent rats from becoming nicotine dependent, but in order to come out with a useful treatment for nicotine addicted people experiments needs to be conducted on rats that are already dependent on nicotine. “We have to make sure we’re mimicking what happens in humans,” Dr. Kallupi says.

The group positioned already nicotine-dependent rats at self-administration boxes where they can choose between food, water, and nicotine infusions for 21 hours a day. Then they paired 30% of nicotine administrations having an electric shock to see if rats could continue to choose nicotine at the face of negative consequences. The rats who obtained NicA2-J1 significantly reduced their nicotine intake whereas the control rats persisted in seeking the nicotine. The NicA2-J1 treated rats were also more resistant to relapse in the face of anxiety. Dr. Gallup said the NicA2-J1 treated rats seemed to experience fewer of the symptoms associated with quitting tobacco.

“One other potential downside is if the enzyme should make it into clinical trials, Dr. Kallupi admits, human smokers might actually smoke initially, as they’d have to smoke more cigarettes to receive the exact same reward. But absent withdrawal symptoms, and with a present intent to quit, she believes “they will stop smoking little because it is not worth it smoking one pack to have the effect of two cigarettes.” Individual clinical trials are still a bit away.

Next up, Dr. Kallupi says, is getting funding for a different study looking at optimal dose ranges of NicA2-J1, potential toxicity, and in the event, the receptor may be combined with other smoking cessation drugs for a synergistic effect. And whether NicA2-J1, independently or in combination with other drugs, proves ready for human clinical trials Kallupi sees this study as a proof-of-concept with this strategy, one that could possibly be pursued with comparable enzymes to drugs of abuse.