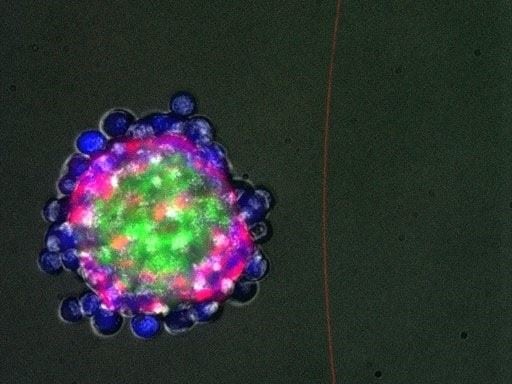 A frequent motif from the self-organization of all multicellular cells is the usage of cell-cell signaling networks to cause morphological alterations. Now, scientists at Wendell Lim’s lab at UC San Francisco have utilized the modular synNotch juxtacrine signaling platform to engineer artificial genetic applications where particular cell-cell contacts triggered changes in cadherin cell adhesion.

“What is amazing about biology is that DNA allows all the instructions required to build an elephant to be packed within a tiny embryo,” said study senior author Wendell Lim, PhD, chair and Byers Distinguished Professor in the Department of Cellular and Molecular Pharmacology at UCSF, director of the NIH-funded Center for Systems and Synthetic Biology, and co-director of the National Science Foundation-funded Center for Cellular Construction.

“DNA encodes an algorithm for growing the organism — a series of instructions that unfolds in time in a way we still don’t really understand. It’s easy to get overwhelmed by the complexity of natural systems, so here we set out to understand the minimal set of rules for programming cells to self-assemble into multicellular structures.”

In their simplest experiment of this type, the investigators programmed two types of cells into self-organize to a two-layered sphere.  They began with a single group of cells expressing a signaling protein in their surfaces, and also another set of cells sporting a customized synNotch receptor programmed to detect that signal protein.

When isolated from one another, these cell populations did nothing, however if the 2 groups were blended, the grim cells triggered the synNotch receptors around the cells that were clear and actuated them to generate tacky cadherins along with a green mark protein named GFP.

The researchers moved on to plan groups of cells into self-assemble in more complex ways, like building three-layered spheres or beginning with one set of cells which piled themselves into two different groups prior to forming a layered world.

They engineered cells which shaped the beginnings of “polarity”- the different front-back, left-right, head-toe axes which define the “body plans” of several multicellular organisms- by expressing several kinds of cadherin adhesion molecules that instructed that the mobile assemblages to divide to “mind” and “tail” segments or to create four different aerodynamic “arms”.

“People talk about 3D-printing organs, but that is really quite different from how biology builds tissues. Imagine if you had to build a human by meticulously placing every cell just where it needs to be and gluing it in place,” said Lim, a Howard Hughes Medical Institute investigator and member of the UCSF Helen Diller Family Comprehensive Cancer Center, in the statement. “It’s equally hard to imagine how you would print a complete organ, then make sure it was hooked up properly to the bloodstream and the rest of the body. The beauty of self-organizing systems is that they are autonomous and compactly encoded. You put in one or a few cells, and they grow and organize, taking care of the microscopic details themselves.”