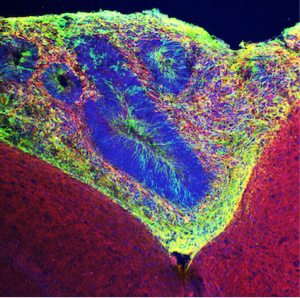 “Tissues are wonderfully complex structures, so to engineer artificial versions of them that function properly, we have to recreate their complexity,” said Ali Khademhosseini, who led the study and is UCLA’s Levi James Knight, Jr., Professor of Engineering at the UCLA Samueli School of Engineering. “Our new approach offers a way to build complex biocompatible structures made from different materials.”

Ali Khademhosseini, a UCLA bioengineer and team have now designed a specially adapted 3D printer to build therapeutic biomaterials from multiple materials. This advance is a step towards on-demand bioprinting for use in transplants and other surgeries.

The method utilizes a light-based procedure called stereolithography, and it benefits from a customized 3D printer made by Khademhosseini that includes two important components.

The first is really a custom-built microfluidic processor- a little, horizontal platform comparable in dimension to a computer processor- with a number of inlets that “prints” another substance.  The other element is that a digital micromirror, a range of over a thousand tiny mirrors which every moves independently.

The micromirrors direct light on the printing surface, along with the illuminated regions indicate the outline of this 3D object that is being published.

The light also causes molecular bonds to form in the substances, which leads the gels to firm into solid material.  As the 3D object is produced, the mirror selection varies the light pattern to indicate that the shape of every layer.

The researchers initially used this technique to make simple shapes, such as pyramids. They then progressed to make complex 3D structures that mimicked parts of muscle tissue and muscle-skeleton connective tissues.

The team also printed shapes mimicking tumors with networks of blood vessels, which could be used as biological models for cancer study. They further tested these printed structures by implanting them in animal models and found that the structures were not rejected.