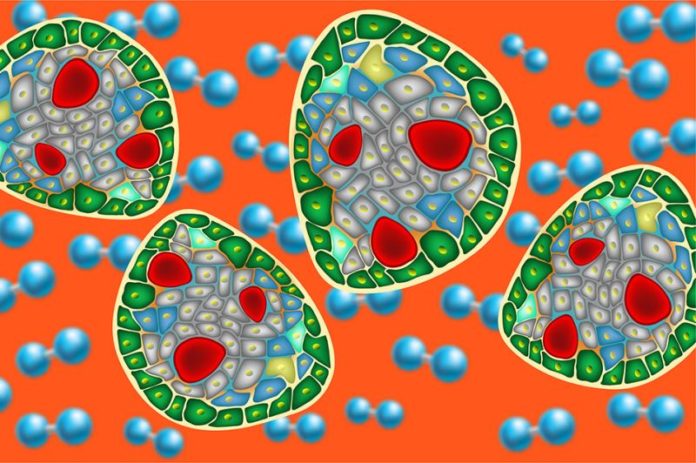 Pancreatic islets Implants Come With Their Own Oxygen Tanks

Islet transplantation can functionally cure Type 1 diabetes but requires immunosuppression. Islet encapsulation has promise for eliminating immunosuppression, but improvements in performance are needed. Foremost amongst the outstanding problems is oxygen supply limitation, which is a primary cause of failure.

Donor islets are isolated from pancreatic tissue by enzymatic and mechanical processing, which disrupts their blood supply. Transplanted islets rely solely on diffusion for oxygen and nutrient supply, secretion of hormones, and removal of waste products. Oxygen is the first species to become diffusion limited.

Therefore, a study in attempt to find a suitable solution to this oxygen deficiency problem, has now come up with an implantable Islets cells for patients with type 1 diabetes, that furnishes islet cells with their own supply of oxygen, via a chamber that can be replenished every 24 hours.

“Getting oxygen to these cells is a difficult problem,” says Clark Colton, an MIT professor of chemical engineering and the senior author of the study. “The benefits of this approach are: you keep the islets alive to perform their function, you don’t need as much tissue, and you reduce the ability of the implants to provoke an immune response.”

Tests of these implants in rats showed that nearly 90 percent of the islets remained viable for several months, and most of the rats maintained normal blood glucose levels throughout that time.

Previous research in Colton’s laboratory discovered that the outer surface of islets needs to be exposed to at least 50 mm Hg of oxygen to remain viable and produce insulin normally. Through a series of experiments, the MIT team, working with researchers at Beta-O2Technologies, determined the operating conditions of the device needed for islets to stay alive and function for long periods of time while assembled in a compact form small enough to be implanted in human patients.

To protect the implanted cells from the immune system, the researchers coated them with a slab of a naturally-occurring polysaccharide called alginate. The slab contains a membrane that keeps immune cells out but allows insulin, secreted by the cells in the implant, to enter the bloodstream.

Beta-O2 Technologies researchers are now developing new versions of the device which feature an oxygen storage chamber that can be implanted below the skin but separate from the islets. This version would only need to be replenished once a week.